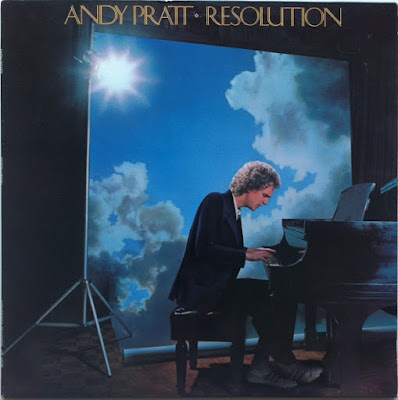 When it was first released in 1976, Resolution garnered great critical acclaim. While claims by Rolling Stone that Pratt "has forever changed the face of rock" seem far-fetched, it still is one of the finest singer-songwriter albums of the '70s. While Pratt's expressive, but sometimes high-pitched, voice may not be everyone's cup of tea, there is no denying that the songs themselves were superb. Furthermore, the arrangements and intricacies within each selection were something to behold. No two songs sound alike, yet there is a thematic link between everything presented -- that being the power of love to pull, push, and sustain every human being. The idealism and optimism that is pervasive throughout is balanced by a sense of how hard it is to reach that point, and thus the hopefulness seems real and earned. It is difficult to say which cuts are the highlight of the album, since each is so well thought out and constructed. Every listener will undoubtedly choose particular favorites. The range of music varies from jazzy ("Set Your Sights") to melodic and gentle pop("Everything Falls Into Place"(Lillian's Song)," to nearly hard rock ("Karen's Song"). Also particularly worth noting is the complex arrangements on "That's When Miracles Occur" and the father-son theme explored on the moving "Can't Stop My Love" (which explores Pratt's feelings related to his father's death). Although this album never attained the commercial success that many predicted, it remains a classic that deserves to be heard by a wide audience.

This Harvard graduate fused classical music and rock, attempting to transcend both, and blowing us away in ambition and achievement. We said that Mick Jagger "sounds mannered and jaded after Pratt" and that Pratt "has forever changed the face of rock." Four decades later, Resolution just sounds like a real good singer-songwriter album with unusual orchestrations, but there's nothing wrong with that. Pratt converted to Christianity a few years later and made more explicitly spiritual music, eventually releasing over 20 albums.

"Always emotionally charged, the instrumental textures evoke volcanic eroticism on one cut, aching tenderness on another. . . The songs carry rock harmony one step beyond the Beach Boys and the Stones. Because they modulate so frequently and unexpectedly, they require concentration. . . Like the late-19th-century Romantic composers, especially Scriabin and Mahler, Pratt uses chromatic restlessness to evoke extreme emotional volatility." — Stephen Holden, RS 216 (July 1, 1976)

I have been rediscovering this gem lately. In my view, it truly is one of the great records of the 1970's. It is quite accessible, and yet it is quirky and sophisticated, and no two songs sound alike. There are elements of jazz in "Set Your Sights," hard rock in "Karen's Song, " and sheer pop beauty in "Everything Falls into Place." Every song has to do with the power or love and finding your own self on this life journey of ours. It is apparent that Pratt had taken a long journey to get to this point. Pratt has a piercing falsetto in his voice at times, and that may take some getting used to, but I think it adds to the uniqueness of his music. This album amazingly takes Pratt's idiosyncratic style, and makes it all so professional, without making anything sound fake at all. This music reeks of 70's male sensitivity, so if you are looking for anything close to macho, you won't find it here. But don't mistake sensitivity for lack of substance, because that would be a mistake. Maybe the end of the song "Treasure That Canary" best sums up the strength of this album. It is catchy yet layered, with a great lead guitar line, descending bass, Andy's falsetto, sophisticated drumming, and yet a hummable melody all at the same time, and lyrics that are optimistic and yet show the difficulty in getting to that optimism. It should be mentioned that some of the best session players of the time are on the album, such as Steve Gadd on drums and Tony Levin on bass. And the great Arif Mardin of Aretha Franklin and Bee Gees fame, among others, does a fantastic production job. Though I am not familiar with all of Pratt's very early and later work, I can't imagine he could ever top this recording. His 1973 album on Columbia, which sounds like he was in a depressed state, has a definite different feel than this one and is more raw but just as quirky and sophisticated. I think both are classics, and it could be argued that either is better than the other. But I can't think of an album that gives the phrase "pop music" a better name than this one.