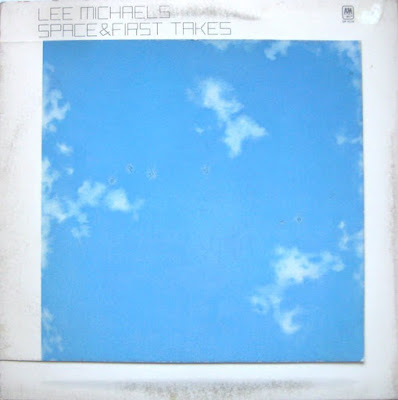 This album is a fascinating hybrid of psychedelia and mainstream hard rock, incorporating elements of both. Consisting of two short numbers (clocking in a under five minutes) and a pair of extended tracks running a quarter-hour each, it stands apart from most of the extended art rock jams of its era by virtue of its consistent, driving beat and the emphasis on crunchy guitar sounds (courtesy of ex-Paul Revere & the Raiders ax-man Drake Levin and Michaels himself). The title track and "Hold On to Freedom" seem like a lot of empty posturing, although the playing and production on "Space and First Takes" have enough of a psychedelic edge that its 16-minute length is mostly a virtue. "First Names" is slightly shorter, and intense enough across 14 minutes to pull the listener in even deeper and more successfully.

I'll bet it surprised Lee Michaels when 'Space and First Takes', released in 1972, never took off commercially. After being relegated to a spot as a second tier California rocker in the late 1960's, Michaels scored a rousing accidental hit with 'Do You Know What I Mean?' on 1971's 'Fifth'. This album followed, and Lee put together a hard rock delight. The album only consists of four songs, neatly divided into a short and an extended piece on each side of the vinyl. The late 1960's spawned the era of the opus, with many pioneering bands offering long-winded exposes, such as Iron Butterfly's 'In-a-Gadda-da-Vida' and the Chambers Brothers 'Time Has Come Today'. This phenomenon so gripped the times that many bands took Top 40 hits and expanded them into lengthy show topping excursions, such as The Byrds take on 'Eight Miles High', and Crosby, Stills, Nash and Young's epic 'Carry On'.

So in 1971 it's no surprise that an aspiring artist like Lee Michaels would take a cue from everything happening around him, and produce his own extended works. These songs do not come across as productions that would have been better in a truncated version. The instrumental variations on the basic themes are intriguing and deserving of the vinyl they displaced. In fact, for avid fans of lengthy guitar jams, the performances offered by Lee Michaels and former Paul Revere and the Raiders lead guitarist Drake Levin are nothing short of exquisite. They are hard rocking and varied, making the approximate quarter hour devoted to each tune a rewarding investment. The two shorter numbers are also strong guitar based compositions, the best being side two's 'Hold On To Freedom', which would appear as the opener on 1973's 'Live'. The live version is actually superior, as it is delivered on Michael's cherished and familiar B3 Hammond organ with great weight and energy. The studio version offered here is good, but the song is much better tendered on the B3 than guitar.

If there is any explanation for why this album essentially became Lee Michael's swan song, it would have to be the lyrics. While Lee could at times be a compelling lyricist, he could also come up with some of the most mundane or confusing of lyrics. He offers a pertinent example of each on this disc. 'First Names', the extended piece offered on side one, delivers trite thoughts such as "First names, running around my brain. First names, they all sound the same". Sometimes I think Lee actually wrote songs, including his hit, "Do You Know What I Mean?" as Ecclesiastical statements on the meaninglessness of it all. On the other side of the coin, and the other side of the vinyl, we have the title track, the last extended piece. I'm really not sure what Lee is talking about in 'Space and First Takes', though it does seem to have to do with the musician's studio experiences. As on most of Lee's albums, however, the lyrics are certainly secondary to the instrumental prowess and captivating guitar performances churning throughout.

The Lee Michaels catalog contains four discs that I consider essential to my musical collection, 'Live', 'Lee Michaels' (his third studio album), 'Fifth', and this release. Of the three, this one gets the most frequent spins in my CD changer. I've always been enamoured with extended guitar jams, and these make the half-hour listening time fly by swiftly, effortlessly, and with great aural gratification. Unfortunately, a used copy of this out-of-print disc will set you back forty dollars at present. The MP3 tracks offered by Amazon consist of only the two shorter songs from the album, certainly due to the extended length of the more desirable tracks. I wouldn't hold my breath waiting for these relatively obscure productions to be released again, so if you find a reasonably priced copy anywhere, be sure to grab onto it. In lieu of that, contact a friend who can make a copy for you. Life is short. Don't be without it.
Posted by Zen Archer at 12:05:00 PM