The Cecil Taylor Unit
1976
Dark To Themselves 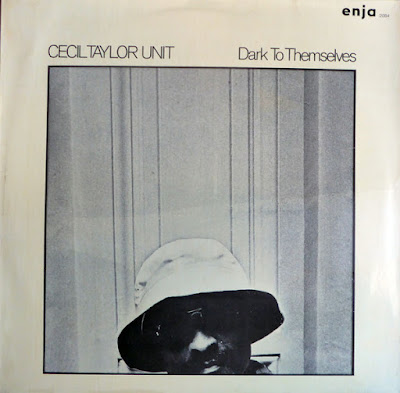 Dark to Themselves begins a five-year run of fantastic recordings by the Cecil Taylor Unit. The 1990 CD reissue includes the entire June 18, 1976 performance (which was truncated to fit onto the original 1977 vinyl release). Unlike the more structured Unit masterpiece One Too Many Salty Swift and Not Goodbye or the breathless but exhaustive solo masterpiece Air Above Mountains, Dark to Themselves is a barn-burner from the word "go." Notable for featuring a young David S. Ware, our century's heir-apparent to the late-period playing of John Coltrane, it is really the work of trumpeter Raphe Malik that drives large sections of this performance. Jimmy Lyons is brilliant as usual, and the underrated Marc Edwards (who would later play on the Charles Gayle Quartet masterpiece More Live at the Knitting Factory) is especially nimble, giving the entire Unit the freedom they need to accentuate the anarcho-balletic playing of bandleader Cecil Taylor. Though it lacks the boozy brilliance of Live at the Cafe Montmarte or the sheer will of Air Above Mountains, Dark to Themselves easily ranks as one of Cecil Taylor's best records.

Dark to Themselves is a continuous 61-plus-minute performance by pianist Cecil Taylor and his 1976 quintet (which also includes such fiery players as trumpeter Raphe Malik, his longtime altoist Jimmy Lyons, tenor saxophonist David S. Ware, and drummer Marc Edwards). There is a quick theme along with brief transitions that form the composition "Streams and Chorus of Seed," but the bulk of the passionate performance is taken up by spontaneous and intense solos. Listeners with very open ears, and longtime fans of Taylor's, can consider this explosive performance essential.
Posted by Zen Archer at 6:52:00 PM