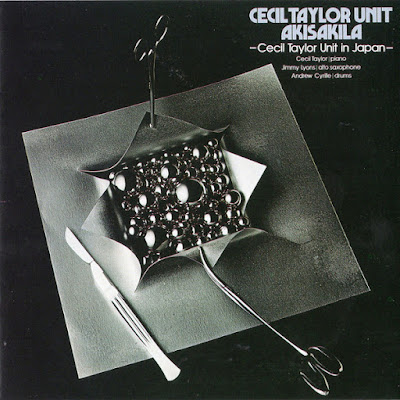 This concert, strung out over two CDs, is one of the few from the 1970s (recorded in 1973) that features Taylor with a trio; in this case, it was composed of the late saxophonist Jimmy Lyons and drummer Andrew Cyrille. The material is one extended improvisation entitled "Bulu Akaskira Kutala." The early '70s was Taylor's most articulate period of his method of propelling dynamic energy forth into conical spirals of harmonic mystery and danger. While his music had dispensed with the notions of form and interval long before this, the simultaneous explosion of group energy reached its first zenith during this period. It is also clear how dependent Taylor was on Lyons' voice. Lyons was one of the few alto players who understood the place he held in the music of Taylor, not only in the band. He would carry forth an extended harmonic idea as a soloist, but also as a sounding board as to which voicings Taylor could color -- which corner to turn and how fast to get there before moving off in a different direction. Cyrille, was, arguably a better drummer in the context of the Cecil Taylor Unit than Sunny Murray in his ability to understand that Taylor was also a drummer with a keen lyrical sensibility, no matter how angular. Cyrille's fills, weaves, dances, and shutter-stop rhythmic invention played counterpoint and complement to Taylor's sharp legato style that held at its core the very essence of rhythm in improvisation. The concert reaches its summit about a third of the way into the second disc, when all three players move around a sharp and complex harmonic fragment that opens up the inside of the collaboration, goes into overdrive, and breaks wide open. Taylor is playing large chords and right-hand trills in jagged repetition, which brings Cyrille's bass drum and cymbals up and spreads them out, with Lyons playing a glorious counterpoint with furious legato phrasing that embodies and bridges both statements. It's a segment of pure wonder and raw power. This date, though recorded a decade later, is a fine complement to Nefertiti, the Beautiful One Has Come.

AKISAKILA has long been one of my favorite Cecil Taylor recordings. I think Andrew Cyrille was his best drummer, and here we have the power trio of Cecil, Jimmy Lyons on alto, and Cyrille on drums. This is the Cecil Taylor Unit playing Maximum Energy Music, so if that is what you want, go no further! The sound is not perfect, but not bad at all, just a little rough around the edges. I love the cover art on Vol. 1, with the surface of reality being peeled back to reveal the densely packed Spheres of Energy within.

This concert, at Koseinenkin Dai-Hall in Tokyo, was one marathon performance lasting over 80 minutes, given the name "Bulu Akisakila Kutala." It stretches over two discs, so be very careful what it is you're getting. The first disc, Vol. 1, is what you want, at a minimum, with 61 minutes of the piece. Toward the end Lyons makes an entrance playing high, bluesy extended notes sounding very much like Ornette Coleman before speeding up and joining the fray again. This beautiful passage serves as a sort of ending to the disc before it fades out, with the musicians still playing at full blast.

The second disc, Vol. 2, doesn't really make any sense by itself. It starts with the 20-minute conclusion of "Bulu Akisakila Kutala," followed by 30 minutes of Cecil solo, four shorter tracks recorded on May 29, 1973. Given that the long trio piece does not really have a structure, it is simply 20 more minutes similar to Vol. 1, and given that the short solo pieces are not on the same level as Cecil's great solo concerts such as Silent Tongues or Air Above Mountains, Vol. 2 is not worth pursuing other than to complete Vol. 1. I finally tracked down a used copy recently, and this is my conclusion.

It is unfortunate that AKISAKILA has been so hard to find over the years, and unfortunate that it has not been combined into one set. I have the original Konnex discs from Germany. Apparently there have been a couple of Japanese reissues, but again, be very careful what you're getting with multiple product listings and confusing names that often do not specify whether it's Vol. 1, or Vol. 2.
Posted by Zen Archer at 5:20:00 PM