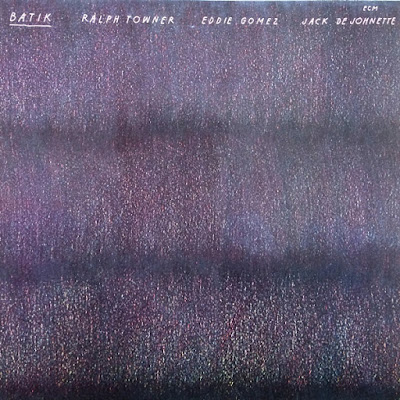 There are certain images that seem fail-proof when musically evoked. The “Waterwheel” that inaugurates us into guitarist Ralph Towner’s astonishingly beautiful Batik is one of them. Having since been painted for us by such varied talents as Hamza El Din (see the Kronos Quartet’s Pieces of Africa) and Marina Belica (former leader of the October Project, of which their self-titled debut is a personal all-time favorite), Towner’s particular configuration embodies the best of all worlds with the precision of his fingers magnified to great effect by Jack DeJohnette on drums and soothingly animated by the bass of Eddie Gomez. Towner’s democratic shifts in density allow for solos to shine through the haze unhindered, such as the enchanting bass that darts through his added splashes of 12-string. Towner rejoins in overdubbed costume, while amplified sustains peek like the sun from behind a cloud. Their passage through the sky is marked only by DeJohnette’s delicate metronome, allowing us one final glimpse of its thematic pool. “Shades of Sutton Hoo” is named for an Anglo-Saxon burial ground and haunts us with its reverberant lows and tinkling cymbals. A noticeably freer structure pervades, tracing every mound of earth with archaeological care. This delicate filler leads us up a “Trellis” of melody into ghostly afterthoughts. Gomez’s voice cuts with urgency through Towner’s ornamental stride. Their sumptuous counterpoint continues in the 16-minute title track and sets us down comfortably in Solstice territory. DeJohnette unleashes a noteworthy solo, while Gomez laces his quick fingers to support every hoisted footstep. We end in the “Green Room.” Painted with Towner’s mournful piano, it glows in a wash of potent commentary from bass and brushed drums, crumbling like spring snow into silence.