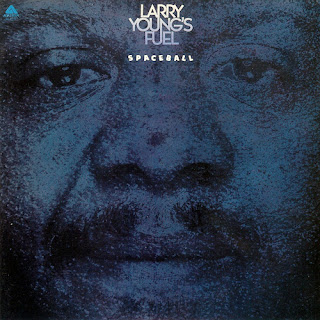 
Larry Young's final album is a wonderfully quirky strange album, the kind that only Larry can put out. Funky jazz, early progressive rock, lounge exotica, bizarre disco and other types of instrumental music all come together on this strangely naive album that was out of step with the sophisticated and slick world of jazz fusion in 1976. Larry's synthesizer tones leap out of the mix and sound like those novelty synth records from the late 60s, it is as if he has just discovered the synthesizer ten years after the fact.
Some bands and artists that might come to mind as you listen to this rare gem include Bo Hanson, Sun Ra, Keith Emerson, Return to Forever, Nina Rota, Tony Williams Lifetime, Les Baxter, Frank Zappa and especially Parlaiment/Funkadelic, particularly their prog-rock influenced keyboardist, Bernie Worell.

My favorite cuts on this album are the ones in which Young plays in an instrumental style that sits just between instrumental progressive rock and 60s exotic synthesizer records. His layered keyboards and synthesizers have that pure analog sound that was becoming harder to find in the late 70s. On the other hand, the tunes that are less successful are the disco leaning funky jazz tunes. These cuts may have been his attempt at commercialism, but after he added all his weird synth lines, they ended up sounding pretty bizarre, and a little too 'creative' for most dance floors.

Along with Young, another big star on this album is guitarist Ray Gomez, one of the great overlooked fusion guitarists of the late 70s and beyond. He plays a couple blazing solos as well as some rapid syncopated rhythms.

I don't think this album is for everyone, a lot of people would probably be turned off by the cheeezy exotica elements, but I happen to enjoy records that combine exotica with prog-rock/fusion ie Bo Hanson's Lord of the Rings, Fripp-Summers' Bewitched, Andy MacKay's In Search of Eddie Riff, Phil Manzenera's Primitive Guitars and Return to Forever's synthesizer based fusion. This album isn't quite weird enough to belong in one of those incredibly bizarre music compilations, but it is close.
Posted by Zen Archer at 1:34:00 AM