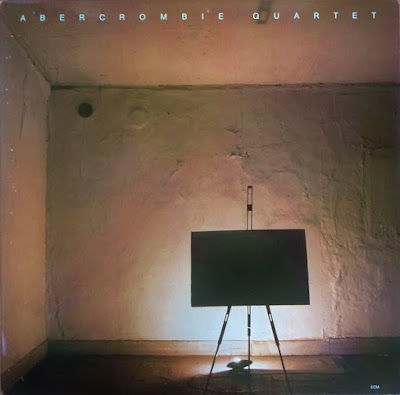 One year after debuting with Arcade, the John Abercrombie Quartet cut out the auditory paper doll that is this curiously overlooked sophomore effort. What set the quartet apart from its contemporaries was not only the fluid playing of its frontman and the ways in which it intertwines with that of musicians who are clearly beyond intuitive, but also the sense of development in the structuring and ordering of tunes. Beginning with the pianistic groove of “Blue Wolf” and ending on the acoustically minded “Foolish Dog,” this self-titled peregrination winds itself into a tour de force of solemn virtuosity. From Richie Beirach’s overwhelming cascades to the contortions of bassist George Mraz, we encounter a virtual entity of unity whose heartbeat counts off to the drumming of Peter Donald and whose eyes glow with Abercrombie’s characteristic pale fire. This body unfolds into a misty landscape, where the gusts of “Dear Rain” spread melodies into the open pastures that is our love for harmony. Looser gestures like “Stray” (here, both verb and noun) share appendages with the resignation of “Madagascar,” which falls like a sheet from a clothesline in an oncoming storm. As the quartet grows in fully, Abercrombie’s gentle remonstrations graze the bellies of clouds with the barest touch of curled fingers, allowing “Riddles” to build their conversational nests in the branches of an undisclosed longing.

No matter how “into it” these musicians get, they always display an admirable restraint, so committed are they to the thematic altar around which they cast their spells. There is a sound that lingers on the palate, one that finds in its cessation the birth of something new.
Posted by Zen Archer at 9:18:00 PM