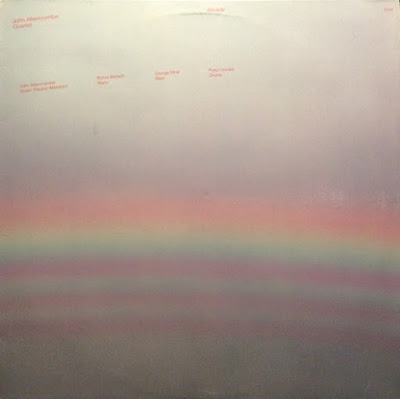 Toward the end of Akira Kurosawa’s Kagemusha, a rainbow spreads its band across the ocean to warn General Katsuyori not to proceed into the Battle of Nagashino that lies ahead, for to do so will mean certain doom. Tragically, he ignores it and rushes himself and his men into an all-out massacre. Such omens are rare outside of the cinematic imagination. And yet, if the reader will allow me to draw a weak connection here, we find a similar image in Arcade, the cover of which signals to us a music that does heed that call and luxuriates in the sonic benefits of its deference.

The title track, with its buoyant bass line courtesy of George Mraz (onetime member of the Oscar Peterson Quartet) and an effervescent Richard Beirach (rightful heir to the Tatum/Evans legacy) on piano, frames John Abercrombie’s adventurous fingers like gloves, making shadow puppets against the taut screen of Peter Donald’s drumming. This formula works from the get-go and provides plenty of magic from which the quartet spins one glorious melody after another. A splash of rain brings us to the “Nightlake” with downcast eyes as Abercrombie lays his rubato soloing over a liquid rhythm section. The results showcase the quartet at its best. “Paramour” is another stunner. Lush and romantic, it works over the listener in waves. Mraz digs deep into his emotional reserves for this one. Meanwhile, things are a bit more cosmic on “Neptune,” where a bowed bass cuts a swath of moonlight in the nebular darkness. Abercrombie launches tiny rockets into the stars with his mandolin, tracing new constellations on the way to becoming one himself. In closing, the group shows us what “Alchemy” is all about. From its humble awakenings arises a majestic beast. Every appendage is an instrument animating the harmonious whole, tickled by Beirach’s ivory and gilded in a layer of cymbals. As its heart contracts, the guitar lets out a plaintive cry, running ever so delicately into the shadows of resolution.

Abercrombie’s pinpoint precision abounds, his mid-heavy picking amplified to buttery sweetness, and shares notable interplay with Beirach. Over a yielding backing, these sustained reverberations occasionally coalesce in bright tutti passages. The resulting sound is nothing short of enchanting. A neglected classic to be sure, Arcade is available on CD only in Japan, and is one of three fine John Abercrombie Quartet sessions that one can only hope are next in line for an Old & New Masters treatment.
Posted by Zen Archer at 9:14:00 PM