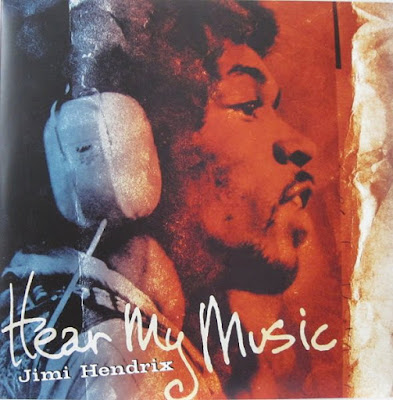 This collection of instrumental recordings reveal just a few of the creative explorations Jimi Hendrix was undertaking throughout the first half of 1969.

Never intended for release in their present state, this collection shines further light on his creative development and unending quest for new musical challenges. The diversity of these recordings-from solo demos to group efforts with The Experience to free form jam sessions-make clear Hendrix’s sheer love of playing music and interacting with fellow musicians in any setting whatsoever.

This insightful 11-song release features “Slow Version,” “Ezy Ryder/Star Spangled Banner,” “Jam 292,” “Trash Man,” “Message To Love,” “Gypsy Blood,” two versions of “Valleys Of Neptune” including a solo electric guitar rendition and a piano solo, “Blues Jam At Olympic,” plus the original unedited versions of “Drone Blue” and “Jimi/Jimmy Jam” from the long out-of-print 1980 release Nine To The Universe. Hear My Music marks the first time these recordings have ever been released in their original unedited format.

The fact that this CD is 70 (or so) minutes of purely instrumental Jimi makes it unique, especially for those who enjoy and/or collect instrumental music, playing it while involved in artistic/creative pursuits, etc. The Star Spangled Banner section is surprisingly good, not just a straight rendition, but nearly on par with the Woodstock version, wherein one truly senses dropping bombs & wailing victims. In terms of playing this music while involved in artistic activities, well, it may be a tad too intense; and one may wish there were more serene moments (as in brief tracks 8 & 9) but certainly one will, at times, be involved in artistic pursuits where the intensity of the instrumentals will, in fact, be compatible.
Posted by Zen Archer at 1:49:00 PM