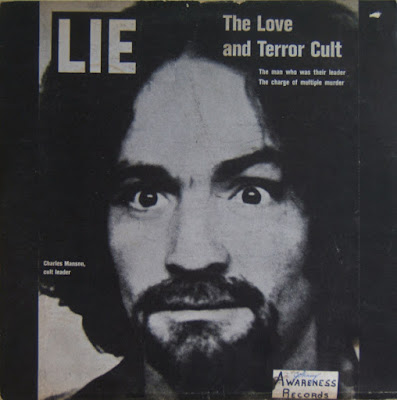 A living, walking example of the hippie dream gone terribly awry, before Manson and his family went on the killing spree that virtually undermined and eventually destroyed the peaceful atmosphere of the Southern California community, the fledgling musician tried several times, unsuccessfully, to land a recording contract.

First venturing to California in the mid-'50s, Manson soon found himself serving yet another stint in prison (by age 30 he had lived half of his life behind bars). But, after a time spent living in Washington state, Manson arrived in Southern California in 1967 in hopes of becoming a hippie singer/songwriter. Settling in Topanga Canyon, the quasi prophet met several of L.A.'s most prominent musicians including Neil Young, Dennis Wilson, and Doris Day's son, producer Terry Melcher. The very idea that someone like Manson was fraternizing with a Beach Boy and the son of Doris Day is indicative of the blurred reality that existed in Southern California at the time. Yet, though his music and views are easily dismissable today, at the time several people in the community, including Neil Young, believed in Manson enough to try and secure him a record contract. Throughout 1968, Manson made demo tapes with Gregg Jakobson and Terry Melcher and, with the influence of Dennis Wilson, came close to inking a deal with Brother Records, the imprint of the Beach Boys. In fact, the group reworked Manson's "Cease to Exist," re-titling it "Never Learn Not to Love" and included it on their 20/20 LP. By 1969, however, Manson and his family of hippie outcasts had suitably scared away any potential recording contracts with their increasingly disturbing behavior, and Manson never released an album of his work as a free man.

After his arrest, however, the impending media blitz of the trial created interest in Manson's music, albeit for somewhat dubious reasons, and fringe labels such as Performance and White Devil released his albums such as Lie and Commemoration. Manson also saw one of his songs recorded by the biggest rock & roll band in the world at that time when Guns N' Roses included a poorly received Manson composition on their 1993 covers album, The Spaghetti Incident?

As Charles Manson awaited trial for the 1969 murders of seven people, the music he had recorded in 1967 and 1968 saw the light of day. Lie: The Love and Terror Cult was released on March 6, 1970, coincidentally the same day the court revoked its original decision to allow Manson to represent himself.
Before he became a national figure for leading a group of people on a killing spree, Manson had been trying to break into the Los Angeles music scene. In the spring of 1968, he had befriended Dennis Wilson of the Beach Boys, who paid for studio time, introduced him to some industry pals like Byrds producer Terry Melcher (actress Doris Day's son) and allowed Manson to live in his house. That relationship soured after a few months as Manson's "family" grew and the atmosphere surrounding him became even more dangerous.
Still, Wilson thought enough of Manson's songwriting to rewrite his "Cease to Exist" and bring it to the Beach Boys as his own composition, "Never Learn to Not Love." It was released as the B-side to "Bluebirds Over the Mountain" in December 1968 and on the group's 20/20 album a few months later. The changes infuriated Manson, who went to Wilson's house with a loaded gun, only to discover that Wilson wasn't there. Instead, he gave the housekeeper a bullet and a message.
Four months after the August 1969 murders, Manson and several family members were arrested. While in custody, he asked Phil Kaufman, a hanger-on in the Los Angeles scene whom he met during a previous incarceration, to see that his music was released.

Perhaps not surprisingly, Kaufman was unable to find a major label willing to be associated with Manson. After raising $3,000, he pressed 2,000 copies and distributed it through Awareness Records, the same label that had put out Bob Dylan's The Great White Wonder – widely considered to be rock's first bootleg.
The album was titled Lie: The Love and Terror Cult, with a cover image mirroring the Dec. 19, 1969, Life magazine that featured Manson, using the same photo and typeface. The only differences were the altering of Life to Lie and the removal of a subtitle. The LP's 13 songs include "Cease to Exist" and other somewhat prescient titles like "Ego," "People Say I'm No Good," "Don't Do Anything Illegal" and "Sick City."
Lie: The Love and Terror Cult sold only 300 copies on Awareness, but ESP-Disk picked it up for distribution later that year. Eventually, the record, and subsequent albums of unreleased Manson recordings, became collector's items in the punk and metal scenes during the late '80s.
Guns N' Roses released "Look at Your Game, Girl" as a bonus track on their 1993 album "The Spaghetti Incident?" (with Axl Rose saying "Thanks, Chas" at the end). Hardcore shock punk GG Allin covered "Garbage Dump" in 1987. And the Lemonheads released several Manson songs before becoming one of the most successful alternative bands of the early '90s.