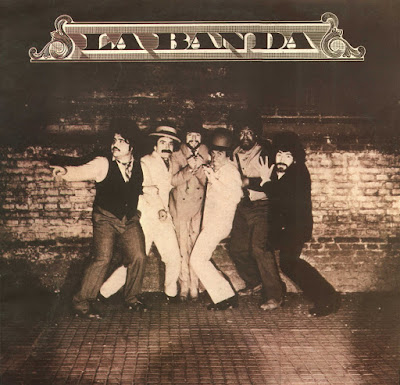 
Ruben Rada is a famous Uruguayan artist who has successfully completed over 30 albums, many of which have come to be considered as classics. This amazing musical genius has not only created beautiful songs but is also a composer, percussionist, and creator of a brand new genre of music called “Candombe.” This unique style was created through his integration of different genres and instruments such as, Rock and Mexican music. He has also appeared on television and in films. His unfortunate inability to form or find a stable band has followed him in his entire career. Over the years he has tried to find stability with the Fattoruso Brothers, El Kinto, Totem, Otros Shakers, La Banda, and La Rada. Despite being very successful, both when performing solo songs and when performing with his band mates, he could never find members to stick with over the years. In spite of all this, he has been able to find global fame performing from the United States to his home country Uruguay
Ruben Rada was born on July 17, 1943 in the Palermo district of Montevideo, Uruguay. Growing up he had a special love for music with some of his favorite singers being Ray Charles and the Beatles.
His first job required him to do song covers and imitations of famous artists on a radio show. Though he did not gain any quick fame, he was exposed to and quickly learned music ranging from Mexican songs to tangos.
In 1956, he got his first big break while riding the public bus. He met some jazz musicians who turned out to be the Fattoruso brothers. They were impressed by the young boy’s love for music and invited him to join their band, the Hot Blowers. He continued to play with them until he was 20 years old.
In 1964, he teamed up with Eduardo Mateo to form the band ‘El Kinto Conjunto’. The band’s unique sounds came from their innovative use of Latin American elements fused with Rock and other genres. They were also the first band in his country to create the beat genre in Spanish.
He decided to briefly relocate to Argentina where he was able to record his first solo album and hit single ‘Las Manzanas’. The single was a major success and due to his popularity he was invited to participate in the Rio de Janeiro’s Festival of Popular Music in 1965.
In 1966, he joined the band ‘Totem’. Together, they successfully recorded two albums and became one of Uruguay’s most popular bands in their unique genre.
In 1977, his former band mates, the Fattoruso Brothers, invited him to come to the United States to assist in the recording of their second album, ‘Magic Time’. Together with his new band, OPA, he created one of the best musical works of his time.
For the next few years he tried unsuccessfully to create a lasting band. He recorded albums with the bands: La Banda, Otros Shakers, and La Rada. From 1980 to 1991, he produced an average of one album each year.
Ruben Rada literally created the Spanish beat genre later named the “Candombe Beat”. The style has its root in the unique combination of the piano, chico, and repique. The beat became widely popular and has been utilized by countless musicians.
Paul McCartney is rumored to be a huge fan of Ruben Rada. 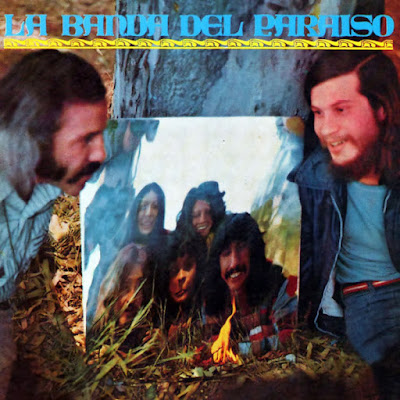 
Boogie blues with hamonica, brass & honky tonk piano etc. It's very American-sounding with proficient musicianaship, not hugely exciting music though not terrible if you like that kind of thing. No Lo Veo is the strongest track here and the nearest to hard rock, with cool wah wah riffing. El Fondo Del Ojo is probably the least conventional track and most psychedelic, with some awkward sitar in there... Love It!
Posted by Zen Archer at 2:52:00 AM 1 comment: Links to this post 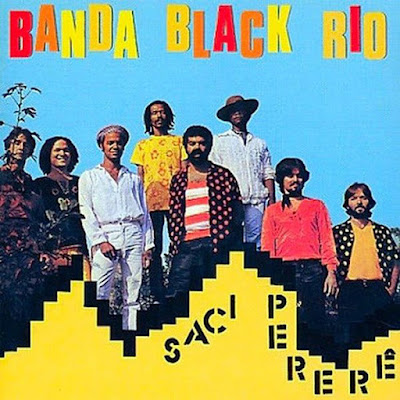 One of the best albums ever from Brazilian soul legends Banda Black Rio – a tight batch of jazzy funk that's their last testament of greatness! The group are in fine form here – grooving like a Brazilian version of Earth Wind & Fire as they mix together bubbling basslines, smooth keyboards, and funky horn riffs – plus a few regional twists too, like work on cuica and Brazilian percussion! The record's a bit smoother than some of their 70s work, but that gives it a sophisticated jazz funk sound that makes things a bit more soulful than usual – and which has the same appeal as some of the best late 70s work by Azymuth, particularly their classic album for Warner Brothers!
This is a fabulous soul funk rare gem...... Think Earth Wind and Fire with a Latin twist. Super sonics as well.
Posted by Zen Archer at 2:45:00 AM 1 comment: Links to this post 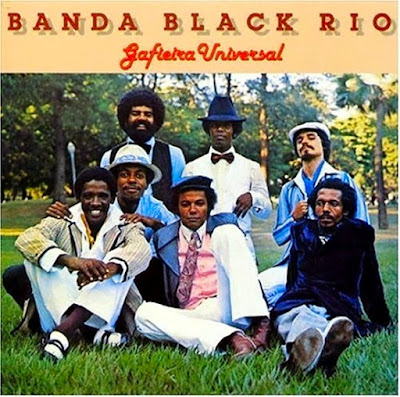 This is an obscure Brazilian funk band who have been re-released on the back of the resurgence of all things 70's and funky. They were no doubt a very famous band in Brazil at their peak in the late 70's but as far as the rest of the world goes, virtually unknown. So it's nice to get the chance to hear them, because they developed a nice latin spin on the American funk played by the likes of Earth, Wind and Fire and the Ohio Players. There are some great instrumental tracks on this which highlight the percussion and all round jamming nature of the band, and only a few tracks with vocals (in spanish). The vocal tracks are fine, but not knowing the lingo it kind of takes away from them a bit. However definitely worth getting for the music. If you want to try something with a slightly different flavour in your dance music get this.
Posted by Zen Archer at 2:28:00 AM 2 comments: Links to this post 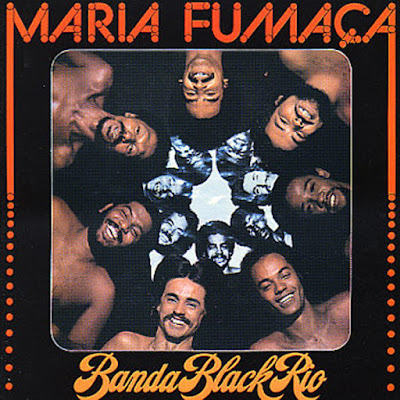 Banda Black Rio’s ‘Maria Fumaca’ is one of the strongest Brazilian samba-disco-funk-soul-fusion albums of all time. As regularly played by Theo Parrish, Gilles Peterson and co.

Banda Black Rio were formed in 1976 by the late Oberdan Magalhães in Rio de Janeiro. They revolutionised ‘black instrumental music’ at the time with their Brazilian re-interpretation of soul, jazz, funk and disco grooves, inspired by the likes of Tim Maia and reminiscent of Kool & The Gang and Earth Wind & Fire during their most on-point period of the 1970’s. ‘Maria Fumaca’ is the groups first album, originally released by Atlantic in 1977; a record that bought the group worldwide fame.

‘Maria Fumaca’ features in a list of the 100 greatest Brazilian albums of all time published by Rolling Stone Brazil, coming in at number 38.

Characterized by a sound in which rhythm & blues served as the vehicle for danceable variations incorporating the gafieira style, samba, and jazz, the band had in its variable formation, the trumpeter José Carlos Barroso, drummer Luís Carlos dos Santos, keyboardist Jorge Valdir Barreto, guitarist Cláudio Stevenson Jorge, and bassist Valdecir Ney Machado, among others. Their first hit was the samba-funk “Maria Fumaça,” released in the eponymous LP (WEA, 1977). The song was the theme of the soap opera Loco-Motivas (TV Globo). Recording originals and versions for songs like “Na Baixa do Sapateiro” (Ary Barroso) and “Casa Forte” (Edu Lobo), they were compared in the specialized press to other soul-funk bands like Kool and the Gang and Earth, Wind and Fire, having success in England’s dance houses in the late ‘90s. The band recorded two more LPs — Gafieira universal (RCA,1978) and Saci Pererê (RCA 1980) — until 1980, when they dissolved. In 1999, the Banda Black Rio resumed activities with a new formation led by Oberdan’s son William Magalhães.
Posted by Zen Archer at 2:24:00 AM 6 comments: Links to this post 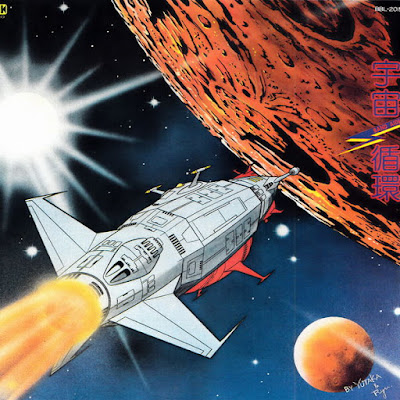 An album split in 16 short tracks, scanning various musical styles, but instead of inconsistency you will get a mass of enjoyable, well-composed and fairly progressive tunes.With Ishima coming out FLOWER TRAVELLIN' BAND, it is quite reasonable that the album contains lots of spacey soundscapes, although this time they are delivered in a more melodic manner with careful synthesizer work and happy guitar work around, based on mid-tempo, optimistic rhythmic lines.The presence of Muraoka adds some lovely jazzy flavors in another package of pieces, while a few tracks even swirl around Folk and light, symphonic territories, based on the pastoral flute passages, the acoustic sounds of what appears to be a traditional Japanese string instrument and the deep sense of melody around.Despite being in 1978, the discreet organ and piano presence recalls the earlier years of the decade, while there are also some Pre-New Wave echoes in the album in a pair of tapping and very groovy cuts with a touch of funky beats within the process.Total mess you would think, but I tell you the joyful atmosphere is the main characteristic of the whole album and the music is played with good energy and inspiration.

It is quite impressive the fact that keyboardist Nobuhiko Shinohara eventually appeared in Flower Travellin' Band reformation in mid-00's, almost three decades after Band Aide's only work. 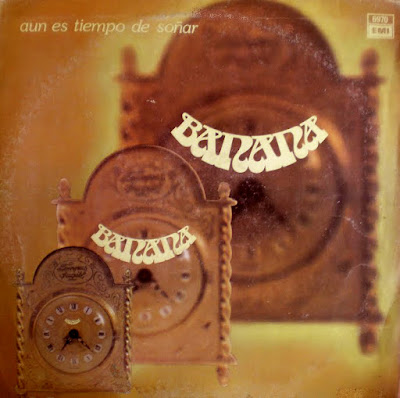 Formed by Cesar Banana Pueyrredon (b. in Buenos Aires, 1952), BANANA play a somewhat typical symphonic prog with a strong emphasis on guitar and vocals. The youngest of eight children, Cesar's rather timid disposition prompted him to take refuge in piano playing. He took lessons, attended the Catholic University (Argentina) and got together with brothers and friends for a few jams. Eventually, they decided to take on the name BANANA and in 1979, they released an album which boasted honourable sales in South America (Uruguay, Chile, Paraguay, Costa Rica, Guatemala and Panama).

Their album, entitled "Aun Es Tiempo De Sonar", is at times very good, at times quite average prog. The music shows a variety of influences ranging from YES to NEKTAR, FOCUS, KAIPA, GENESIS and CAMEL. Though their sound is very melodic and the guitar most prominent, the rhythm section is pretty basic and the keyboards (mostly Fender Rhodes) are usually relegated to the background. As for the vocals, they are fairly abundant but sound rather AORish, or crooner style, if you like. What this album lacks is perhaps a little Latin flair - something similar to what their fellow countrymen ESPIRITU do. This definitely would give their material a bit more punch and originality.

Don't get braked by the band title or unexpressive album cover, relax and taste this BANANA; the music in "Aun es tiempo..." is simply beautiful, delicate, dreamy, uplifting, peaceful and emotional 1st class symphonic prog.
Mainly influences are YES, GENESIS or even some melodic FOCUS, but what keeps more rejoicing is the own band melodic Argentina expression. Yeah, the music is more in accessible side, probably not requiring repeated listens to grow on like more adventure Argentina bands such as ALAS, MIA, BU BU, even so I highly recommend "Aun es tiempo..." as the proposal is perfectly reached, I mean the mood is in heart beauty art realm; to get pretty convincing is this field, is also a gift.

"Aun es tiempo de sonar" is a jewel; you have masterly placed organ, moog, ARP, electric piano by the band leader Cesar Pueyrredon (compositions comes from him) and his voice and chorus band are stellar (yeah sometimes his vocal interpretation talent can fit to AOR or popish side). Guitars comes in precise measure. Compositions are coherent and tight.

This BANANA can be compared with PABLO EL ENTERRADOR, but has the advantage of having perfect 70's studio sound production while the last suffers with sonic problems. The authentic south American melodic emotion can also be compared with the Venezuela masterpiece ESTRUCTURA "Mas alla?", but "Aun es tiempo?" is overall a more coherent album.
Posted by Zen Archer at 2:01:00 AM 1 comment: Links to this post