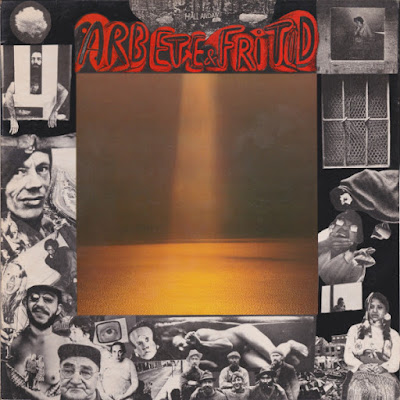 
One of the cornerstone bands of the Swedish psychedelic continuum, Arbete & Fritid featured members of many of the most notable units of the era (Parsson Sound, Trad Gras Och Stenar, Harvester/International Harvester, Archimedes Badkar et.al.), though unlike their sister bands, Arbete & Fritid would counterpoint their manifestations of the hallmark Swedish drone/trudge psych aesthetic with irreverant dips into the genre wells of everything from faux-Elvis Presley ramalamma, to frenzied improv cacophany. More Arbete & Fritid brilliance will follow in the coming days...

Their best, and it's stupid this hasn't been reissued. Arbete och Fritid had a handful of different styles/directions they pursued over their career. They started as a jazz-inflected ethno folk group, then became an almost entirely acoustic pure ethno folk group. Se upp för livet, on the other hand, was this sprawling, slightly odd mishmash that was almost Faust-y at times. Going through that album made this band's inclusion on the NWW list make a lot more sense, as that's where that sound starts in their catalog.

But this? It's RIDICULOUS here. Droney, krauty experimental rock that hovers between minimalism and surprising levels of heavy (Jag foddes en dag starts off sounding like Venom, and I'm not at all kidding).

And what's better, the B-side harkens back to the sound of their very first album, when the jazz drumming and changes (along with more Agitation Free-esque ethno-trance stuff) were still a part of what they were doing. There ain't none of yer plaintive, Nordic folk stuff here. These guys have gone full weird.

Alvaro
1977
Drinking My Own Sperm 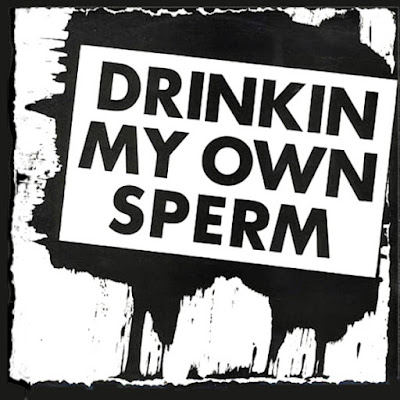 
Composer, vocalist, keyboardist, and poet Alvaro Pena-Rojas, better known as "Alvaro the Chilean With the Singing Nose," has been compared to John Lennon and Tom Waits, though in fact his strange music exists in a category of its own. With a large number of self-released recordings that borrow from such diverse sources as his Chilean background, European avant-garde, minimalism, and easy listening pop music, Alvaro has forged an endearing legacy of DIY and outsider music. Born in Chile in 1943, Alvaro released several singles of pop music in his native country in the late '60s before moving to London in 1974. Once there he hooked up briefly with Joe Strummer in an early version of the 101'ers, Strummer's group prior to the Clash.

Over the next several years in London and Germany, he recorded several demos, often just soloing on piano or keyboards and vocals, or occasionally with a drummer and bass player. With punk all the rage of London in 1977 and an emphasis on independence from record labels where bands would release their own material, Alvaro started his own label, Squeaky Shoes Records. His own quirky music, though nothing like the noise of punk, had even less commercial potential. With help from Antonio Narvaez on various percussions and vocals and Cathy Williams on vocals on one track, and himself on piano, lead vocals, percussion, pinquillo, double flute, bass, whistle, and stones, Alvaro's first LP, Drinking My Own Sperm, was recorded in November 1977 and came out soon after. The next several years saw the release of more full-length albums, singles, and tapes from Alvaro, all issued on his own label. His third record, The Working Class, recorded in Bavaria in 1979 and released the next year, was a completely solo effort with no overdubs. His single "Mariposa" from 1985 was considered the weirdest single in the Virgin Records Megastore in London at the time.

Often shuttling from London to Continental Europe, as well as South America, to record and tour, by the late '80s Alvaro relocated to Germany. He played some concerts on the East Coast of the United States in 1991 and continued to tour and release records and CDs throughout the next decade. Through self-production, Alvaro has maintained his unique vision, that combination of an unusual singing voice; music that is steeped in Chilean folk music and yet influenced by modern European experimentation; and strange lyrics in Spanish, English, and German. Since the mid-'70s, he has also published several books of poetry with various presses.

Chilean singer/songwriter composer Alvaro Pena-Rojas moved to London in the early 1970's and hooked up with pre-Clash Joe Strummer in the 101-ers, but then spent most of the punk and post-punk area sculpting an incredible catalog of 18 albums and singles, including one of the strangest albums of all time, 1977's "Drinking My Own Sperm". Alvaro's music is uncompromising and passionate, blending everything from Eno-esque, yet distinctly Latin-tinged pop experimentalism to piano composition to radical folk poetry. His unique approach to the flute on some of his records has also saddled him with the tag "The Chilean with the Singing Nose."

Alvaro Peña-Rojas was an advertising exec who ended up living in a squat in London when he chucked his professional career to fulfill his dream of being a musician. Rooming with he-who-would-become Joe Strummer, Alvaro was a founding member of the squat's pub-rock band, The 101ers. After the Pistols opened for The 101ers at the Nashville Rooms, Strummer felt like he was destined to become a punk, and founded The Clash. Alvaro took his own trio into the studio (along with singer Cathy Williams, then in Red Balune with her boyfriend, Geoff Leigh) and used his savings to record Drinkin My Own Sperm, which he then had pressed up on his own Squeaky Shoes label. The music is a mad mélange -- like Andean lounge music in parts, like berserk early Eno in others, and filled with the strange joy of Alvaro's keyboard inventions throughout. The album's title-track -- which Alvaro has long claimed was an ode to his lonely existence in London -- strikes us more like the move of a canny marketer. Because of its title, the record was banned on the BBC and often noted in contemporary mainstream journals as yet another sign of the disgrace that was punk. Of course, we leave the ultimate decision to you, but one has to wonder.
Posted by Zen Archer at 2:45:00 PM 2 comments: Links to this post 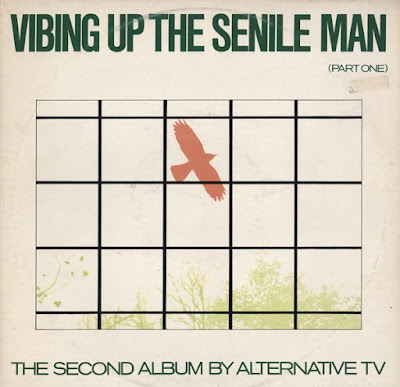 Tracks 1 to 9 Recorded at Pathway Sound Studios.
Tracks 10 to 13 recorded live at the Albany Empire and Stonehenge Festival, 1976, published before on Alternative TV / Here And Now* - What You See... Is What You Are
Tracks 14 to 16 recorded live at Manchester University, May 5th 1979

It was the old, old story. Bored bank clerk falls in love with punk rock, writes a few pages about it, Xeroxes a fanzine, sells it at gigs, creates a monster, starts a new fashion. The first issue of Sniffin' Glue featured the Ramones and Blue Öyster Cult; the Punk Reviews page hit the Flamin' Groovies and the Stranglers, and the intro hinted at treats to follow: the Nazz, Roogalator, the Raspberries, and the Count Bishops. There really wasn't much punk around in those days.

The magazine grew with the scene it championed, and for a year, it ruled the British fanzine roost. But the bank clerk, Mark Perry, was sick of writing -- he wanted to step out and be written about himself. His last band, the New Beatles, had done nothing; his next, Alternative TV, could scarcely do any worse.

Featuring Perry on vocals, ex-Generation X drummer John Towe, Mickey Smith (bass), and former Nobodies guitarist Alex Fergusson, the band formed in March 1977, rehearsing at Throbbing Gristle's studios in Hackney -- both "Love Lies Limp" and "Alternative to NATO" were written and recorded there -- and on May 6, 1977, ATV made their live debut in Nottingham.

Towe was replaced by Chris Bennett, and in this form the band continued to gig, at the same time as preparing the ground for their debut album. They are caught rehearsing in The Punk Rock Movie, the cinéma vérité documentary of punk's first savage summer; more exposure came in December, when the "How Much Longer" single appeared on Perry's own Deptford Fun City wing of Miles Copeland's Illegal setup. The Image Has Cracked, the group's live and studio debut album, appeared the following spring.

Singles "Action Time Vision" and "Life After Life" followed, together with the archive Towe-era "Life," but ATV were changing first, as Perry rocketed on toward the Throbbing Gristle sound which by now captivated him (the official bootleg Live at the Rat '77, incidentally, was recorded by Genesis P-Orridge).

By the time of Vibing Up the Senile Man (Part One), the second ATV album, and its accompanying single, "The Force Is Blind," only Perry remained from the original band; only bassist Dennis Burns remained from any of those who had followed. And, of ATV's original, punk-era press disciples, even Sounds found the album unlistenable.
Unperturbed, Perry took the new album out on the road, but an end of sorts was in sight. In March 1979, on-stage at Chelmsford, ATV called it a day. Side one of the valedictory Scars on Sunday album preserves highlights from this final show; side two introduces the Good Missionaries, the band that would pick up exactly where ATV left off, only without the encumbrance of such an historically resonant name.

But of course it wasn't the end really. The first ATV reunion, with Fergusson back on board, occurred as early as 1981; another kept Perry amused through the second half of the decade and, in 1999, Perry celebrated the release of his 20th album, under the born-yet-again name of Alternative TV.

On the second album of Alternative TV, Mark Perry and friends did to punk exactly what the movement had intended for the establishment. About-facing punk and turning it on its ear would be a difficult task in 1980, and while Alternative TV's peers headed down new wave paths or into commercialism, the authors of the quintessential "You Bastard" single (regarded by many, John Peel included, as a classic) and, of course, The Image Has Cracked LP, which remains on a par with the first Sex Pistols or Clash albums for genre-defining punk, who would have expected a follow-up as avant-garde abstraction that challenges P.I.L's Second Edition for absolute left-field swing? With Genesis P-Orridge in the ranks, Vibing Up the Senile Man became closer to free improvisation and avant-garde jazz without a punk anthem in sight, and a dub edge to some of the tracks of the double LP suggest that Alternative TV had similar modernist aspirations to John Lydon's post-Sex Pistols project. Captain Beefheart and Frank Zappa spring to mind as much as Pere Ubu and the Red Krayola, who were similarly exploring the avant-garde liberties of post-punk and disappointing the punks and record industry alike. What Vibing Up the Senile Man represents two decades later is a door opening on multi-faceted post-rock music -- which draws on avant-garde, noise, and jazz and arguably makes more sense in the context of year 2000 as a musical treasure much more than in 1980, when it seemed simply a spit in the eye to the industry that codified punk.
Posted by Zen Archer at 2:26:00 PM 1 comment: Links to this post