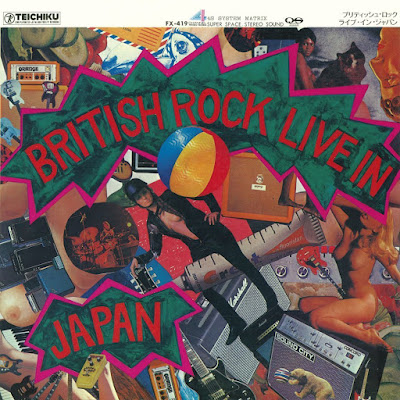 01. Trip To West Coast From Britan
a) A Song For Grateful Dead
b) A Song For Deep Purple
c) A Song For Atomic Rooster
d) A Song For Mothers Of Invention, Zappa
e) Viva, Uriah Heep
02. Echoes
03. Jimi Hendrix Mad Song


It's 1972 Japan, but it is in reality, pure Krautrock freakout city. You know the drill by now - think debut albums by Guru Guru, Ash Ra Tempel, Tangerine Dream, etc... If you enjoy that sort of thing, then you will absolutely swoon for this one. If not - run... run... RUN FAR AWAY from it. I presume you all know by now where I stand on such music.

Theoretically these are two cover tunes (30 minute variations of 1 track each side - it's a long album!). The first side is Jimi Hendrix (didn't recognize what they were attempting here at all), while Side 2 is a psychotic variation of Pink Floyd's 'Echoes', a composition that is already greatly enhanced with alternative substances, but this takes the idea to its logical extreme. As the AC astutely observes: "It all seems to be semi-improvised, driven by pummeling rhythms that sort of ebb and flow while the bass, guitar and organ converge and coalesce into one freaky jam after another. Even the most stoned-out-of-their-minds krautrockers would have been shocked by this level of depravity."

While drummer Tanaka is ostensibly the leader of this particular studio group, it's really just another incarnation of the Hoguchi/Mizutani gang heard on so many of these sessions. However, by this time they had lost their minds entirely and exited the studio having belched out one of the most insanely over the top instrumental psych/prog freakouts ever to defile the ears of man. This thing was touted to be a live concert of popular British/American psych/rock tunes by artists such as Pink Floyd and Jimi Hendrix. Except that it's absolutely none of the above. A little fake audience noise can't hide the fact that this is a (very well recorded) "live in the studio" jam session, and there's nary a hint of any cover material at all. Instead, we're assaulted with an amazingly long (almost a full hour!) instrumental blowout, divided into two continuously running side-long tracks. It all seems to be semi-improvised, driven by pummeling rhythms that sort of ebb and flow while the bass, guitar and organ converge and coalesce into one freaky jam after another. Even the most stoned-out-of-their-minds krautrockers would have been shocked by this level of depravity. This is so excessive in fact, that one might imagine modern Japanese psychonauts like Acid Mothers Temple having descended directly from this family tree. Except that they didn't, and this is about ten thousand times cooler. Needs a reissue ASAP, but I'm not sure these guys even remember recording it at this point...