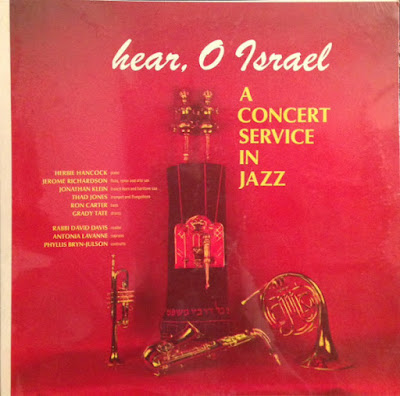 Recorded in New York in 1968 and originally released on a private label.

This album is a missing link in the discography of Herbie Hancock, so much so that many ardent fans didn't even know it existed. Hear, O Israel is the recorded version of a jazz concert comprised of lyric and sacred material from the Friday night prayer service in the Jewish synagogue. Privately released in an edition of a few hundred copies, the music was composed by Jonathan Klein, who was commissioned by Rabbi David Davis in 1965 to write jazz for the Friday evening conclavette. Klein was 17 at the time he began. Composed for piano, bass, drums, soprano/alto/baritone saxophones, French horn, flute, flugelhorn, and two voices, Klein performed it with his own group and Rabbi Davis; it was so successful that a few years later, in 1968, the synagogue commissioned a full-blown concert by name jazz musicians. Klein, then a college student, composed more material to supplant some of what he'd written previously, and the instrumentation was changed a bit. The synagogue recorded this concert and it is presented here as performed by Hancock; Jerome Richardson on flute, tenor, and alto saxophones; Klein on French horn and baritone sax; trumpeter Thad Jones (who also plays flugelhorn); bassist Ron Carter (he and Hancock were part of the Miles Davis Quintet at the time); and drummer Grady Tate. Other participants are Rabbi Davis (reading the proper prayer texts), soprano vocalist Antonia Lavanne, and contralto Phyllis Bryn-Julson. But is it good? Heavens yes. One can hear traces of Vince Guaraldi and the early Columbia period of Dave Brubeck in these compositions, but so what? Hancock's no imitator; he was and remains a tremendously lyrical and rhythmically inventive pianist, and the band plays these charts effortlessly with requisite soul and swing. There are beautiful solos by Hancock, Richardson, and Jones, and the rhythm section is fluid, fresh, and upbeat throughout. The vocalists might bother some listeners, but essentially, these tunes and the manner in which they are presented and recorded are quite striking — in the same way that those appearing on records by Azar Lawrence, Doug Carn, and Harold McKinney in the '70s are. The vocal charts are somewhat abstract, so in a sense they are further out than the jazz. In fact, this is a nearly perfect meld, where jazz and sacred music meet and become something else together. One not only reflects the other, but causes it to transcend itself. The longest track here, the nine-plus-minute "Torah Service — Adoration," is a hopping soul-jazz number with killer funky piano work by Hancock in full-on Blue Note mode. The segments read by Rabbi Davis are also very effective in the context of the band's charts, vamps, and improvs. Hear, O Israel was mastered from an LP copy, since the masters no longer exist. There was some groove wear near the end of each side due to a worn stylus, but considering the source, Jonny Trunk has done an excellent job of cleaning it up without sacrificing a bit of the performance. This recording is available on both CD and LP, and should be heard by anyone interested in '60s progressive jazz or Hancock's career during the period. Hear, O Israel gives an entirely literal meaning to the term "spiritual soul-jazz."

Most likely you don't immediately connect Modern Jazz with Jewish Ritual, but this gorgeous reissue of a long lost private pressing of a 1968 Friday night service may have you rethinking those ideas. Written by Jonathan Klein, a then 17 year-old son of a Massachusetts Rabbi, who was asked to compose music for a service dealing with "Sects and Symbols Within Judaism". The music and service were so popular that the Synagogue incorporated the piece into every Friday night service, and Klein assembled a group to tour various New England Universities. For the debut performance in New York, Klein managed to get the finest New York Jazz musicians to perform his piece, including Herbie Hancock on piano, Ron Carter on bass, Grady Tate on drums, Jerome Richardson on flute and saxophone and Thad Jones on trumpet and flugelhorn with Antonia Lavanne and Phyllis Bryn-Julson on soprano and contralto voices respectively. Thankfully it was all recorded. Unlike the Christian Youth movement who used spiritually minded rock and folk music to sway new converts, the music for this service doesn't pander to youthful audiences. The music swings in unexpected ways for a religious ceremony but its full intent is an abstract spiritual openness. Even with the Hebrew recitations by Rabbi David Davis, the message is divine, universal and inspired. Rejoice!