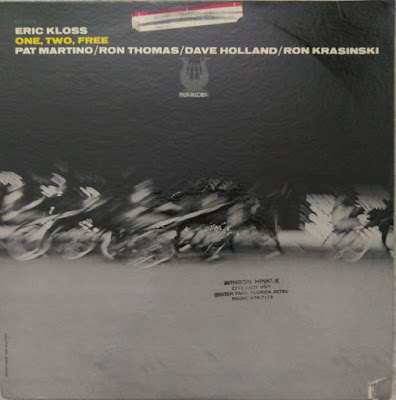 Although based in the hard bop tradition, altoist Eric Kloss was always open to the influence of the avant-garde. This stimulating session features Kloss, guitarist Pat Martino, keyboardist Ron Thomas, bassist Dave Holland, and drummer Ron Krasinski really stretching out on Carole King's "It's Too Late," "Licea," and the three-part "One, Two, Free." Eric Kloss pushes himself and his sidemen throughout the date, and even if the Fender Rhodes sounds a bit dated, the high musicianship and chance-taking are still exciting to hear.

Pittsburgh native Eric Kloss (b. 1949) was one of the most distinctive, original voices to emerge on alto sax in the mid-60s. He was only 16 when the first of his eleven Prestige albums was released in 1965. These records featured the cream of the crop of New York musicians and the young Kloss more than held his own with heavyweights like Booker Ervin, Jaki Byard, Chick Corea, Cedar Walton, and most notably, guitarist Pat Martino.

Kloss switched to the Muse label in 1972 and debuted with this outstanding quartet recording, One, Two, Free ; which remains his finest achievement. In a group featuring Martino on guitar and Ron Thomas on electric piano as well as bassist Dave Holland and fellow Pittsburgher Ron Krasinski on drums, Kloss pushes and pulls his group to take chances that explore the outer edges of bop, fusion and even funky pop music.

The 18-minute, three-part title track is clearly influenced by Bitches Brew (on which bassist Holland also participated). But here, like on the surprisingly substantial funk of Carole King's "It Too Late," Kloss's arched sound and searing style move the ostinato vamp in a more avant-garde direction (the way Arthur Blythe later would). Martino gets a notable share of the solo spotlight and never ceases to amaze in his mixture of cool chordal comps and fleet runs up and down the fretboard.

Kloss's beautiful ballad, "Licea," guided by Dave Holland's moody, signature string work, is the jewel of this collection and probably deserves to be better known. Martino waxes lyrically before Kloss enters for a rueful countenance that's worth the price of admission.

32 Jazz was wise to bring One, Two, Free back into circulation - and maintain Don Schlitten's beautiful cover-art photography too. Priced well below other recent jazz reissues, One, Two, Free is a significant chapter in 1970s jazz and provides a great opportunity to discover the interesting music of Eric Kloss (who, despite no widespread releases since the early 1980s, still performs infrequently at Pittsburgh events with his vocalist wife). Even though there's 42 minutes of music here, one wishes creative interaction this good kept on going. Recommended.

An extraordinarily gifted altoist, Eric Kloss first appeared on the scene at the age of 16, when his debut record won him critical acclaim as a blind child prodigy. By the time of this recording, the 23-year-old Kloss had lived up to his early promise, growing as an open-minded musician with experience playing with such jazz heavy-weights as Jaki Byard, Booker Ervin, Jack DeJohnette, and Chick Corea.
One, Two, Free is an avant-garde album of often funky music, with its strong rhythms rooted in the driving bass lines of Miles Davis-veteran Dave Holland and the vintage Fender Rhodes sounds of Ron Thomas. Kloss and guitarist Pat Martino stretch imaginatively on the 18 minute title track (seamlessly divided into three parts), crafting a memorable original that approaches the electric intensity of Miles Davis‘ work from the same era.

Carol King’s “It’s Too Late” starts off with tongue-in-cheek straightness, but once the theme is stated, the pop-song is turned on its head and transformed into a funky vehicle for exploration. The closing track, “Licea,” is complex and cerebral, but rewards close listening. Featuring two originals and one cover tune, all over 10 minutes long, One, Two, Free is an adventurous blast from the past that still retains its freshness and is definitely worth owning. Buy it, and help rescue one of the unsung heroes of the saxophone from undeserved obscurity.