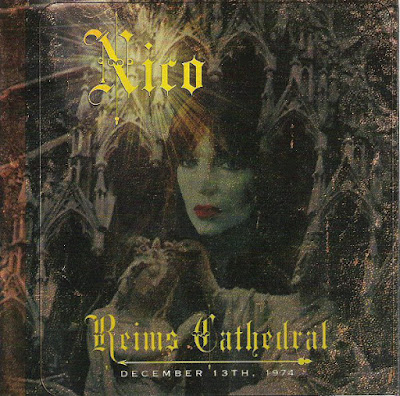 “On December 13, Nico performed at another of her always strikingly original concert venues, this time in Reims Cathedral, where France has traditionally crowned her kings for centuries. Following the event, outraged Catholics throughout the country claimed the church was desecrated and cried out for a special purification ceremony for the monument”
Stephen Demorest (Circus Magazine, April 1975)

On December 13, 1974, Nico was the support act at Tangerine Dream's infamous concert at Reims Cathedral in north-east France. The promoter had so greatly oversold the capacity of the venue that attendees could not move or reach the outside, eventually resulting in some fans urinating inside the cathedral hall. As a result, the Roman Catholic Church denounced these actions, ordered the re-dedication of the cathedral and banned future gigs on church property.

I remember reading about this concert in a British music paper in the 1980s.This was an important gig in her career. The recording unfortunately is very poor. It was probably recorded by a fan in the audience. At times ,dialog in the crowd over shadows the music she makes. This was Nico in her heyday. She performed with only her pump organ and no band.Her best songs are all here. Janitor of Lunacy. the Falconer, and Frozen Warnings among others. Since this was recorded from out in the audience, the reverb from the cathedral is preponderant. However, I take my Nico tunes any way I can get them. this is a landmark recording in her canon. Her performances were deep and moving. Near the end of her performing career, she lost some of the poignancy that she has on these recordings.

Let's clear up a few facts about this extremely rare, and previously unpublished concert recording. First, Tangerine Dream performed in the concert, as the 2nd act. Secondly, the concert was performed in a Catholic Cathedral with astounding acoustics, but it nevertheless was performed in 1974.... 1-9-7-4 folks! 40 years ago. Even the very best recording technology is nowhere near what it is today. Thirdly, and most importantly, both Tangerine Dream (Their set has also been released officially) and Nico had their hopes for a published work dashed by what happened at that concert. The Catholic Church banned all future performances in the cathedral because of what happened there. You can read about the details on another website. Nico wanted her music sold, not aired one time on a French radio station. Tangerine Dream was trying to make a name for themselves. All dashed because of what happened at the cathedral, and how furious the Catholic Church was about it. They had to reconsecrate their church, for cryin' out loud!
Posted by Zen Archer at 1:26:00 AM