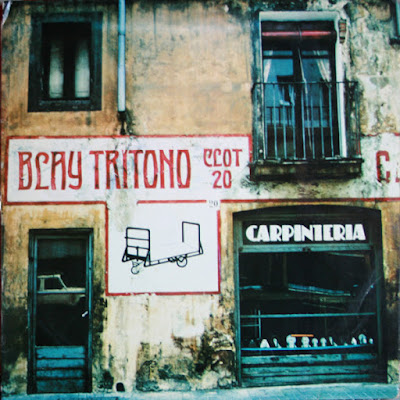 Google Translate, because I was way tooooooo lazy to do it myself... might do it at some point...


Formed by musicians of great technical capacity and innovative will, the Blay Tritono supposes a kind of big band with one foot in the jazz and another in the roots of the native Catalan music. Its name is taken from one of its components, Joan Josep Blay , and from the tritono, a harmonious interval that is considered forbidden and sinister in the most classic harmony.

It seems that the birth of Blay Tritono originates in the recording of an LP that the Madrid singer Julia León recorded in Barcelona and in which several of its future components participated and whose arrangements made Eduard Altaba .

Their music, always instrumental, is an amalgam that combines sounds of the classic Sardinian cobla with modern jazz air and budgets of the symphonic rock, being able to sound like a street charanga, a fierce band of rock or a group of jazz without solution of continuity. Its sound potential is mainly in the section of winds and in rhythms with ethnic reminiscences.

Its fief, like that of many other groups of styles bordering was the room Zeleste Barcelonan, but also acted assiduously in rooms of nearby localities, like the theater of the Farándula in Sabadell or Cava Jazz of Tarrasa.

One of the highlights of his live shows was undoubtedly the performances at the Canet Roc festivals of 1976 and 1977, considered by many as the Spanish Woodstock. There they shared the stage with the whole generation of progressive and symphonic rock: Compania Elèctrica Dharma , Triana , Granada , Barcelona Traction , Atila , Platería Orchestra , Pau Riba , Sonic Secta , etc.

Blay Tritono's only solo album was  "Clot 20 (Edigsa, 1976), recorded in Gema 2 studios and considered today as one of the basic albums of jazz rock and, in general, Spanish progressive music.

In 1977 they participated in the soundtrack of the movie "Tatuaje" (Bigas Luna), which was not released until 1979 and is the first of those dedicated to the adventures of Detective Pepe Carvalho, a character created by the novelist Vázquez Montalbán. In this soundtrack are involved, in addition to Blay Tritono, two other layetano rock groups :  Urban Music and La Rondalla de la Costa . This soundtrack was released on an LP in 1977, well before the film's premiere.

The musical concerns and the diversity of objectives of the components of Blay Tritono make his project gradually disintegrating, disappearing in 1978.

All the musicians who composed Blay Tritono have had before and after a long history, based in almost all cases in music pedagogy and in the world of jazz.

Néstor Munt and Vístor Amman became part of the Orquestra Platería. Néstor was dedicated to musical education and Victor participated in numerous groups, working long time next to Maria del Mar Bonet, Quino Béjar has collaborated with Jaume Sisa. Joan Saura, deceased in 2012, has been one of the greats of experimental electronic music of our country. Eliseo Parra, the only non-Catalan of the group - had been born in Valladolid - came from the group  My Generation and after his trip in Blay Tritono worked for  Maria del Mar Bonet and Marina Rosell . In the 80's he will live in Madrid where he will collaborate on folk projects alongside former members of Our Little World... For all of them Blay Tritono was a transit station in which they were able to fuse a series of elements to obtain a music with own style.