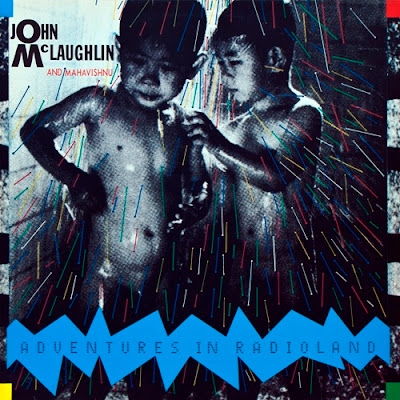 Yet another revamped Mahavishnu emerged in 1986 and released Adventures In Radioland. McLaughlin was having a hard time in the 1980's obtaining a decent record contract. He eventually found a home at Relativity. Relativity, being a minor label, did not do a good job of distributing Adventures in Radioland. Due to this fact, it is one of the least known albums of McLaughlin’s career. At any rate, although now dated a bit because of the use of electronic drums from time to time, this disc is still a superb piece of work.

The new Mahavishnu was a powerhouse of a fusion band and featured, along with McLaughlin, the overly talented keyboardist Mitchel Forman, former Miles' sideman saxophonist Bill Evans, former Metheny drummer Danny Gottlieb and the amazing bassist, Jonas Hellborg. This album cooks. McLaughlin plays guitar synth, less so than on the previous comeback release of Mahavishnu (recently re-released on Wounded Bird Records). He also employs electric and acoustic guitars and burns through the upbeat, elevating tunes. McLaughlin, Forman and Evans all contribute compositions to the mix. This allows for a variety that is more than welcome.

Highlights include “Florianapolis,” “The Wall Will Fall,” and “Mitch Match.” The interplay between McLaughlin and Forman is a particular pleasing affair. Forman is a near genius. Every effort should be made to obtain his solo recordings, especially his earlier releases. But, all the players are strong and confident. This album proved that FUSION could be good music again!

A sloppily produced reissue was released by Verve. The sound and the tunes are the same but it lists Abraham Wechter as playing the acoustic guitar. Come on Verve, you dummies! Abe made the guitar - he didn't play it!
Posted by Zen Archer at 1:01:00 AM