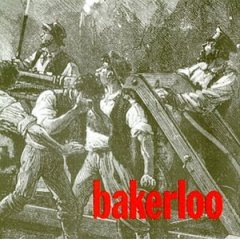 
Bakerloo originally formed around 1968 under the moniker “Bakerloo Blues Line” in the Birmingham area. The line-up then was Dave ‘Clem’ Clempson on guitar and vocals, Terry Poole on bass and John Hinch on drums. Initially they stuck to a largely blues based set, yet like so many of the innovative acts of the era grew tired of the formula and began to experiment. They attracted Black Sabbath’s future manager Jim Simpson, and attracted a considerable following- enough to win them a slot on John Peel’s BBC Radio 1 show “Top Gear”. However, there was a touch of spinal tap syndrome with drummers as Hinch was replaced with a multitude of players until they finally settled on Keith Baker. They also decided to drop the “Blues Line” and became the shortened Bakerloo, and were put on a package tour called “Big Bear Ffolly” (which inspired Bakerloo’s song of the same name) with other local bands Tea and Symphony, Locomotive (another highly innovative proto prog combo) and Earth, who would of course later evolve into the massively successful Black Sabbath.

They recorded their album prior to getting a record deal under the aegis of legendary, recently deceased producer Gus Dudgeon yet eventually, Simpson secured a deal with the new progressive/underground imprint Harvest Records, which housed the likes of Pink Floyd, Edgar Broughton Band and aforementioned fellow Brummies, Tea and Symphony.

Though the album received very enthusiastic reviews and the band had a sizeable cult following, it sold little. This was a shame, because it remains a genuinely progressive album with blues, jazz, classical and heavy rock meeting head-on, yet seamlessly.

However, internal ructions ripped the band apart anyway and despite some line-up reshuffles, with noted rock drummer Cozy Powell joining the band. That line-up lasted a small amount of time before Jon Hiseman, who had been impressed with Clempson’s guitar prowess, invited him to join the legendary jazz rock combo Colosseum. Keith Baker joined Uriah Heep for their classic “Salisbury” album and Terry Poole turned up on blues/jazz rock innovator Graham Bond’s albums of the era. Clempson, after Colosseum split, went on to work with heavy rockers Humble Pie who were a massive success, and Rough Diamond with ex-Uriah Heep singer David Byron, who were not. Clempson continued to work with a variety of artists. However, the other members seemingly fell off the radar after the 1970s.

Still, Bakerloo’s one and only album is a definite underrated classic and has a lot to offer fans of the genre.