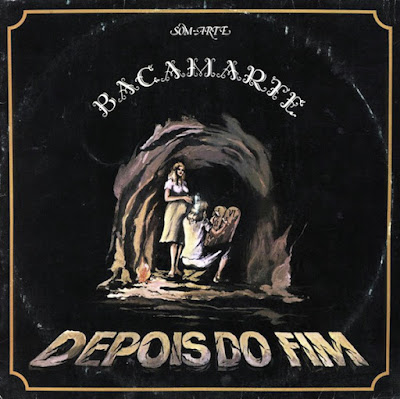 They made two albums entitled "Depois Do Fim" ('83) and "Sete Cidades" ('99). In '95 Rarity Records released their first LP on CD with the addition of a bonus track (due to appear in their second LP). The CD "Depois Do Fim" is one of the highlights of the South-American Prog rock: a compelling blend of varied keyboards (vintage synthesizers, strings, piano, organ), skillful acoustic and electric guitar and strong Portuguese vocals. The nine compositions (four instrumental) sound warm and elaborate with many changing atmospheres. I'm mostly impressed by Mario Neto's alternating guitar play: from powerful and howling electric guitar to a slight Andalusian touch and classical like JOHN WILLIAMS (Sky-era) or using the tremolo-technique on the Spanish guitar (like "Recuerdos de la Alhambra" from TARREGA). Not to be missed by any serious Prog rock aficionado!

Just wonderful. For me, the best Brazilian album ever. Imagine the most beautiful and delicated melodies sung by a clear and sweet female voice (in Portuguese), tons of symphonic keyboards and great guitar interplaying. Well, this is what BACAMARTE offers. At the end of the first song, you'll think that the highlight it's over, but the next track is another highlight, and the next again, and again... Nine pieces will take your breath away. A true masterpiece!
Posted by Zen Archer at 2:01:00 AM