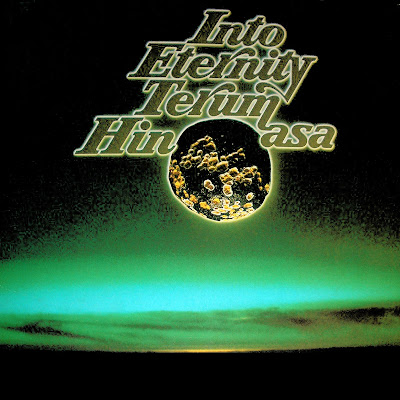 
This is an album that continues to confound a genre label, and avoids sounding out-dated. This is a monumental J-jazz work that can be compared to the "Live in Berlin" album. However the power and creativity here are unmatched by far. This album has definite claims on being one of the first Japanese Spiritual jazz epics. When it came out, Hino's preference for high note scales was compared to those of Hannibal; for example, in the opening track, 'Mr. Happiness': Hino rocks! The mood shifts into a McCoy Tyner-like feeling with the piano modal-aurgasmic orgy by Masuda-san on 'Song for Bumiji'; it does not get any better than this. This track has low-down, subdued introspective, if not karma-dredging, hypnotic pulse to it. Can you hear the subtle Afro-spiritual vibe here? While, these are not black musicians, the spiritual groove could not be darker.

In the Reggie Workman tribute, 'Ode to Workman', Uematsu-sensei smokes the tenor with some snarly-tarlyish modal vibes. The horn section clearly are unafraid of a challenge and show their muscles on the undisputed masterpiece of this album, which has the underlying premise of the three horns are set loose quicker than any Baskerville hounds from a Sherlock Holmes thriller! As an unabashed sax fanatic, this number will grab your soul; twist it, stroke it, titillating your senses as your pulse quickens with each solo. When I met with Poo-sun and Hino-san earlier this year, this album was brought up as one of the more commented pieces of work. Hino-san said his management company continually receives requests from the UK and the States for a reissue; what you guys do not have enough spiritual jazz as it is?! Anyhow, moving on. . .'Mickie's Trip' presents the mastery and finesse of Masuda-san on 'dem ivories; turn down the lights and hold your cup of favourite poison tightly as you experience the Japanese spiritual astral travels.

The second disk has the group continuing to show off their diverse talent by moving into some J-rock/J-funk nuances on the smoldering 'Horizon' with a very snazzy modal intro complete with tinges of an Afro/Far East beat in the background. Do not miss Uematsu-san's extremely impressive and lengthy solo. They further stamp this impression deeper on 'Eastern Egg' with its 'hot 'n cold' J-rock groove. Make no mistake this is the J-rock that blazed the trails for all of later crap-ass mutilations which many know as 'J-fusion or J-rock'. I think it was typical of Kikuchi, Honda and Hino-san in their early work to play with the flow of their albums, from fast to slow tempos, from modal to hard bop. Indeed, 'Kaze' ('Wind') is clearly a meditative spiritual number that allows for some breathing space after the previous track's quick tempo. The last two tracks of the album close up with some free-ish, exploratory and improvisational paths. 'Midnight' is simply an exercise in the use of silence or pauses and is built around some tight playing ¨C as if to say, "that is how our jazz is meant to be". This classic album is superb in the variety of tracks, the balancing of cool and hot tones that are cleverly splashed across their musical canvas with exquisite taste.