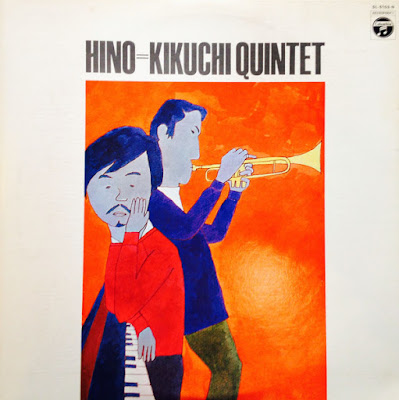 
Terrific modal - hard bop session from the two leaders who would go on to blaze the electric jazz trail in Japan.This session sounds heavily influenced by the classic Miles Davis Quintet of the mid sixties although the four compositions are all originals by Kikuchi.Great heads and arrangements open up leaving plenty of space for exploratory soloing from Hino,Kikuchi and Muraoka supported by the supple rhythm section of Motohiko Hino and Kunimitsu Inaba.
All Killer No Filler!

Hino-Kikuchi Quintet was a short-lived project founded by two future leading artists of Japanese jazz pianist Masabumi Kikuchi and trumpeter Terumasa Hino. Current all-Japanese line up recorded and released only one album ("Hino=Kikuchi Quintet" is stated on cover as a confirmation of co-leading). In mid 90's the band will be reunited for live gig with Greg Osby on sax and different rhythm section, in 2007 Hino and Kikuchi will release two more collaborative albums as co-leaders, but generally speaking "Hino=Kikuchi Quintet" will always mean this only released recording in such important for development of jazz year of 1968.

Both Terumasa Hino and Masabumi Kikuchi were Miles-influenced musicians introducing his kind of jazz to Japanese listeners. Trumpeter Hino already released some hard bop albums,but this work became to him the transition to more complex modal jazz.

Four Kikuchi originals sound exactly as if they are recorded under fresh impression of Miles band with Hancock,or better to say - close to Hancock's own albums, recorded in late 60s (before Mwandishi). Rhythm section is still conservative and anchors advanced Hino & Kikuchi's mainstream jazz building strict repetitive hard bop rhythm basis. Quite well played, tunes aren't memorable at all and main interest is exactly how both Kikuchi and Hino are leaving hard bop searching their new identities in more modern sound of upcoming era.

It's interesting that right after this release Kikuchi will switch to even more new Miles Davis influence - much more revolutionary fusion (and will become this genre leading pianist in Japan), Terumasa Hino future music will split between fusion and mainstream jazz. He will become leading Japanese jazz trumpeter very soon as well.

"Hino=Kikuchi Quintet" stays an important evidence where both them are started, and quite nice listening itself till nowadays
Posted by Zen Archer at 6:08:00 PM