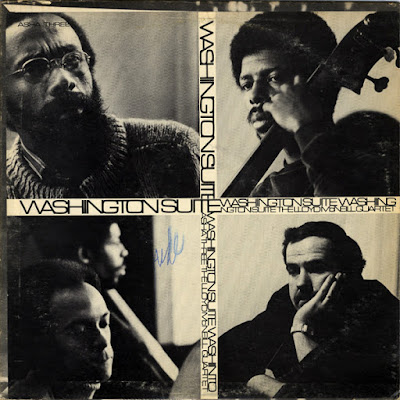 Music composed for the Capital Ballet Company, Wash., DC.
Recorded March 22, 1970 at the National Collection of Fine Arts and March 31, at Workshop-Corcoran.


New edition of this very rare deep spiritual jazz album (currently £400 on Discogs for an original!) first released as a private-press album in 1970 on flautist Lloyd McNeill’s own Asha Record label in Washington, DC. First reissued on Soul Jazz Records’ Universal Sound sub-label in 2011 (long deleted) and now available newly digitally remastered on Soul Jazz Records main label.
Lloyd McNeill is an African-American flautist, poet, painter, and photographer born in Washington, D.C., in 1935. His multi-disciplinary creative life led to encounters and friendships with Nina Simone, Picasso, Eric Dolphy, Nana Vasconceles and other legendary cultural figures. Lloyd McNeill’s hypnotic Washington Suite was originally commissioned as a piece of music for the Capital Ballet Company, in Washington, DC.
McNeill grew up through the era of the Civil Rights Movement in the 1960s and his life and work is a reflection of those ideals. In the mid-1960s he moved to France where he became friends with Picasso, working with a number of émigré-jazz musicians whilst living in Paris.
In the late 1960s he taught jazz and painting workshops at the New Thing Art and Architecture Center in Washington. In the 1970s he travelled throughout Brazil and West Africa studying music and taught music anthropology in the US.
Posted by Zen Archer at 11:38:00 PM