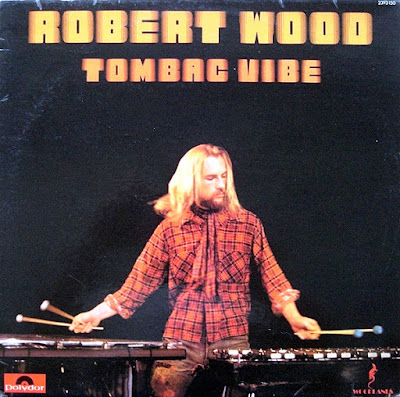 
In 1971-72, English vibraphonist Robert Wood was a member of French band Lard Free, the band Gilbert Artman led before Urban Sax. Wood later asked Artman to play drums on his own second LP, ‘Sonanbular’, while Artman included vibraphone on the first Lard Free official LP (1973), as well as the Clear Light Symphony LP (1975) and Urban Sax. The ‘Sonanbular’ front cover (the industrial devices pictured above) was used for Dominique Grimaud’s epochial book on French 1970s avant-rock ‘Un Certain Rock Français’ volume 1 (1977). Half of the tracks on ‘Sonabular’ are vibes+drums duos where the drums are recorded from a distance, as if from next room (tr.# 1, 4 & 5). But their dialogue is perfectly matched as the drummer adjusts to the vibe player’s bravado. On #4 especially, Wood sounds like a Cecil Taylor on vibraphones. Other tracks, especially the longest ones, arise from mutli-tracked vibraphones (tr.# 3) allowing Wood to build nuanced soundscapes from mostly soft, tiny sounds from 3 different instruments. His techniques includes stereo panning, perspective soundboard mixing and extended vibraphone technique. Woods is not afraid of ugly sounds, sometimes hitting the wooden frame or creating nasty metallic sounds with his mallets. In trying to extend the vibraphone sonic possibilities he sometimes favors the non-resonant sounds of the instrument. Unlike any other vibes player I’ve heard, Wood’s vibraphone playing is unique and owes nothing to Lionel Hampton or the Modern Jazz Quartet…….
Unlike earlier jazz experiments, on his third plate British vibrophonist Robert Wood changed the instrumental nature of his work to vocal. This disc, to a great surprise, is oversaturated with his vocals (very good, by the way), whose timbre remotely resembles Jim Morrison with some notes. Music more and more resembles a bizarre form of the sympho prog, filled with an acoustic and electric vibraphone that slightly resembles an electric piano by sound, and an active rhythm section from bass and drums. Jazz trends also have a place to be here. Extremely interesting and original album……
Posted by Zen Archer at 4:08:00 AM