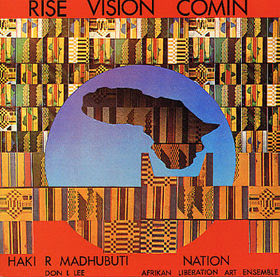 
Born Don L. Lee in Little Rock, Arkansas, poet and essayist Haki Madhubuti was raised in Detroit, Michigan. His father deserted the family when Madhubuti was very young, and his mother died when he was sixteen. An unstable family life created hardship and forced Madhubuti to seek employment and overall self-reliance at an early age. Of the place of poetry in his childhood, Madhubuti commented that "poetry in my home was almost as strange as money."

In the late 1950s Madhubuti attended a vocational high school in Chicago. He joined the U.S. Army for three years beginning in 1960. From 1963 to 1967, while an apprentice curator at the DuSable Museum of African History, Madhubuti held jobs as a clerk in department stores and at the U.S. post office. During these years he also worked toward his associate degree at Chicago City College. Two decades later he received a master of fine arts from the University of Iowa.

WWith the publication of Think Black! (1967), Black Pride (1968), and Don't Cry, Scream (1969), Madhubuti quickly established himself as a leading poetic voice among his generation of black artists in America. His poetry generated critical acclaim, particularly among African-American commentators associated with the maturing Black Arts movement of the 1960s and early 1970s (the first major black artistic movement since the Harlem Renaissance).

His early literary criticism, including in Dynamite Voices (1971), was one of the first overviews of the new black poetry of the 1960s. In this volume Madhubuti insists on the essential connection between the African-American experience and black art and concludes with a call to black nation building. In his own poetry Madhubuti makes extensive use of black cultural forms, such as street talk and jazz music. His poetry also draws its inspiration from the work of Amiri Baraka (LeRoi Jones), the most influential black arts practitioner of the 1960s.

Judging simply by sales within the black community, no black poet in the black arts movement was more popular than Madhubuti. In the last few years of the 1960s, for instance, Madhubuti's slim paperbound books of poetry—each issued by the black publishing house Broadside Press—sold a remarkable one hundred thousand copies each without the benefit of a national distributor. His popularity and artistic promise made him a frequent writer-in-residence during this period at American universities such as Cornell and Howard.

In 1973 the poet rejected his "slave name" by changing it from Don L. Lee to the Swahili name Haki R. Madhubuti (which means "precise justice"). In the same year he published two collections, From Plan to Planet and Book of Life. These volumes of essays and poetry illustrate his commitment to black cultural nationalism, a philosophy that combines political activism with cultural preservation in the drive toward racial awareness and black unity.

Although his artistic production declined during the mid- to late 1970s, the publication of another volume of essays and poetry, Earthquakes and Sun Rise Missions (1984), renewed Madhubuti's advocacy of black nationalism. The poet's most recent collection, Killing Memory, Seeking Ancestors (1987), speaks to the reader who loves and understands black vernacular

Like his literary compatriots in the black arts movement, Madhubuti attempts to create an artistic form and content that best represents the black community, speaks to their needs, and promotes cultural institutions that serve the coming of the black nation. He eschews Western notions of individualism in favor of collective self-sufficiency among blacks within the United States and throughout the world.

In 1978, when the author published Enemies: The Clash of the Races —a scathing critique of racism within white left as well as right political circles—Madhubuti was (what he calls) "whitelisted" and, as a result, lost anticipated income. Such experiences reinforced his commitment to black self-reliance. As founding editor of Third World Press and a founding member of the Organization of Black American Culture (OBAC) Writers Workshop (which includes black literary figures such as Gwendolyn Brooks and Carolyn Rodgers), Madhubuti continues to be active in Chicago-based organizations. He is also cofounder and director of the Institute of Positive Education in Chicago, an organization committed to black nation building through independent black institutions in areas such as education and publishing.

In 1990 Madhubuti published Black Men: Obsolete, Single, Dangerous? The Afrikan American Family in Transition, which addressed issues raised by the author's grass-roots activism over the previous quarter century. Essays in this collection speak specifically to black men, offering analyses and guidance on topics ranging from fatherhood to AIDS. The first printing of the book (7,500 copies) sold out within a month and reconfirmed Madhubuti's popularity within a sizable portion of the black literary community in America and elsewhere.

Madhubuti teaches at Chicago State University. He published Tough Notes: A Healing Call for Creating Exceptional Black Men in 2002, and Run Toward Fear in 2004.

Excellent! Deep afro-centric indy label spiritual jazz from 1974 that is simply an essential purchase for any fan of the Strata East/Tribe sound! Very highly recommended! As featured in the "Freedom, Rhythm and Sound" book!
Posted by Zen Archer at 3:21:00 PM