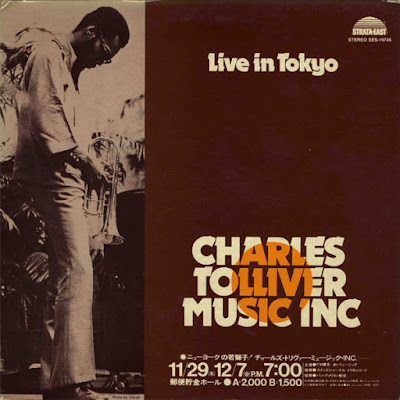 
Quite a few incredible Jazz trumpet players get lost in the mix, overshadowed by big names like Louis Armstrong, Dizzy Gillespie, Miles Davis, Clifford Brown, Lee Morgan and Freddy Hubbard.  Even people who used to be legends seem to be being forgotten by a new generation of Jazz fans.  I can't tell you how many people I talk to that don't know who Roy Eldridge is: blasphemy, really.  But who's to blame for this?  Record companies seem to be more interested in repackaging already-available albums that sell well.

This brings me to Charles Tolliver.  In the company of other trumpet players like Donald Byrd, Booker Little, Blue Mitchell,Woody Shaw and Kenny Dorham, that are less talked about in conversations of greatness, Charles Tolliver's entire discography is extremely hard to get a hold of.  I failed in my first 5 attempts to purchase one of his records on the internet.  At last, Live in Tokyo showed up at my doorstep.

The quartet, Music Inc., plays five long songs on this set.  What this does is allow for more of the moments of cohesive brilliance.  I'm especially appreciative of when the others back off and let bassist Clint Houston take center stage.  "Stretch" and "Effi" are my favorite songs because of this.  The first piece, "Drought", is charged with energy but drummer Clifford Barbaro gets a bit too heavy on the cymbal work for my taste.  It drowns out the others a bit.

Once you hear Music Inc. though, it's easy to see why they were one of the most popular Jazz bands at the time, even if you foolishly only noticed the clinic that Charles Tolliver puts on.
Posted by Zen Archer at 12:00:00 AM