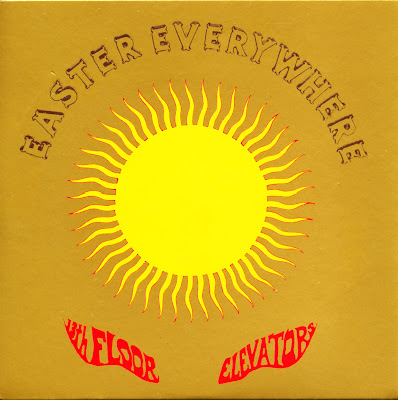 
The Elevators’ second album, “Easter Everywhere” showed the band’s progression light years away from their first one but a year earlier. Indeed, they had transmuted beyond their Lightnin’ Hopkins’n’Hooker heated acid blues; delving further inward to the cosmic eye, mind and beyond.

“Easter Everywhere” is an album that exhibits group chemistry at its ultimate unification. The Elevators had already arrived at a place where they had the songs, lyrics AND feel to animate both into a consciousness-delving manner, but now they took their explorations even further out and beyond the crust, the mantle and the white-hot core of the psychedelic experience into a place where existence can be seen as an eternal dance: a play between time and space, of push and pull (it’s hard to describe without using the language it demands, but here goes) of the whole exchange of thingy-inny to thingy-outty and all that implies…of the spaces between yourself and your existence, as the rollicking rhythm that is life steams full on ahead into the future.

The arrangements on “Easter Everywhere” are extremely psychedelic as The Elevators were both absorbing and channeling the highest illuminations, informed by the raising of their respective consciousnesses through not only LSD dropping, but by FEELING it and converting those experiences into songs coherent for the intake of more rational, less far out states of mind. The massive opening track, “Slip Inside This House” (running anywhere between 10 minutes and an infinity of guises of time lengths) often appears to be quite longer than it actually is due to its strong and steady rolling drums, bass rumblings from Don Galindo and the ecstatic high-ness that is “Slip Inside This House”: an ever-evolving, being into becoming, like an endlessly unfolding lotus of infinite layers as the panels of consciousness shift this way to that in a constant flow of change and motion. It’s like wandering around wasted in suburban springtime sunshine after gulping 10 grammes of hashish and the sheer body buzz of it makes the houses you pass into faces, the doors smile at you as they slowly recede behind you in a curved horizon all stylised late-60’s faux-Peter Max pop art that constantly rotates as though set in motion by your feet. The houses appear, grow larger then smaller and recede -- to be replaced by a constant row of houses in an uninterrupted scene of non-diminished and unchanging returns. And “Slip Inside This House” details all this with its changing static-ness that’s gotta be one of the highest plasma marks of American psychedelic rock and roll ever. The constant Tommy Hall “doot-doot-doot”-ings on jug working alongside the near-constant shifting of sonic patterning that is as ever-returning as the classic Roky vocal bridge of “There is no season/When you are gone/You are always risen/From the seeds you’ve sown.” And when it all finally and subtly fades on a Stacy Sutherland near-surf guitar coda that The Rolling Stones would cop for the main riff of “Jumpin’ Jack Flash,” you wish it didn’t end so soon (The Stones would later appropriate elements and stylings from The Elevators’ own “Monkey Island” for their own proto-hominid rant’n’roll piece, “Monkey Man.”)

The album wriggles on through into “Slide Machine,” opening as it does with a handful of sharp acoustic pickings, only to submerge into the pervious wash of sound where everything merges into a single torrent and it melts into itself, the sky and forever. Roky Erickson’s sweet intonations of “tryin’ to/tryin’ to/tryin’ to get back to you...” grounds the piece into human experience as the rest of the lyrics and music is sheer Cosmic-Speak through the rhythms, buffeted by Sutherland’s searing, fuzz/reverb guitar scatter shots.

“She Lives (In A Time Of Her Own)” sees Roky vocalising about a very special woman, shared by booming harmony vocals that sing the parenthetical title as once more Sutherland’s throws in his proto-“Jumpin’ Jack Flash” riff in the middle section, amidst the clatter of drums and the overall organic yet willful and organised cacophony. And the above-mentioned, nameless ‘special woman’ whose “time does not spin outside her/It’s in every breath she breathes” is forever immortalised in this devotional portrait.

Next, The Jefferson Airplane’s “Somebody To Love” is inverted as “Nobody To Love” with Sutherland intoning a dry, love-jonesin’ supreme as his spiky though sticky-as-molasses guitar riffing streaks across the track with uncontrollable yet barely-reigned in looseness as the sheer sustain of his guitar’s reverberation bleeds through just BARELY in time, zigzagging and ricocheting astonishingly free all over the place. But you’ll need the insanely rare lyric sheet that accompanied the original IA pressing of this mystic aural platter to make 100% coherence out of Sutherland’s sonorous Tex-Mesc drawl. The album finally simmers with a cover of Dylan’s folk/protest elegy, “It’s All Over Now, Baby Blue” here elongated with a length and tempo completely gentle, relaxed and gracefully sad; especially with Roky’s barely detectable whispering of the title near the end that reinforces the sense of rebirth that hovers over the entire album.

“Earthquake” opens side two, and the previous wash of sound from side one is upon us once again as the staunch repetition of the drumming, jug blowing and bass clumping keeps the track with high tension wire humming, only to be interrogated by Sutherland’s hollow-bodied guitarus interruptus in the quick action breaks. So ragingly slinky is this song (what with the ever-steady hi-hatting’n’snare of Danny Thomas and the overwhelming snarl of Sutherland’s fuzz guitar like a mass of black seaweed that mats the surface of this particular roaring river rapids -- halting only for solo feedback and grinding fuzz counter-pointing), hinted at by Roky’s sung lines of pulling through ‘flesh and bone’/’earth and stone’ seems nothing less than cunnilingus of the Mother Earth Herself, all quivering quim and aching rim prompted along by Roky’s ecstatically freaking tonguing whine of ‘mmmmmmmmmmm...!’ And Sutherland’s fuzzed/shearing/searing guitar solo at the end may be one of his best. Although it’s practically the same notes he always utilises throughout the album, somehow THIS arrangement of them are particularly effective.

From here on in, “Easter Everywhere” has almost nowhere to go but to hunker down and take stock quietly, as they do with the plaintive Roky-sung “Dust.” Although primarily acoustic, Sutherland e-guitar prowls the perimeter with wisps of gentle vibrato, but wouldn’t you know it -- The Elevators come charging out full tilt with the last brash explosion on the album: “I’ve Got Levitation.” Here Roky is calling out for the Music of the Spheres over low-end surf guitar fills and an overall clattery blow-out that sees a weird edit right before the fade, failing to dissipate the energy or blow its spell one whit. But with its fiery passing, The Elevators take things way down with “I Had To Tell You,” sung softly by Roky and harmonized with jug-player Tommy Hall’s wife, Clementine. Their voices weave with acoustic guitar hi-hat, tambourine and harmonica as Roky comments on the chaos all around him, soothing to a degree, but none so more so than “Postures (Leave Your Body Behind).” Only here, the undulating rhythm lightly charge the scene, and it’s an ever-returning one that mirrors the album’s opener “Slip Inside This House” in terms of Roky’s reiterated lyric passages that are constantly re-inserted as soon as you’ve forgotten them. “Remember…remember…” he’ll sooth one minute, then onto a different line that gets repeated, like “etches that flow from your energy” or “keep on climbing.” And the more-hypnotic-than-Sam Andrews guitar keeps on lightly nudging your mind and body to “remember...remember” -- for there are “evolutions everywhere.”

A broader expanse was never mapped out by a rock’n’roll band of its time.
Posted by Zen Archer at 3:40:00 PM