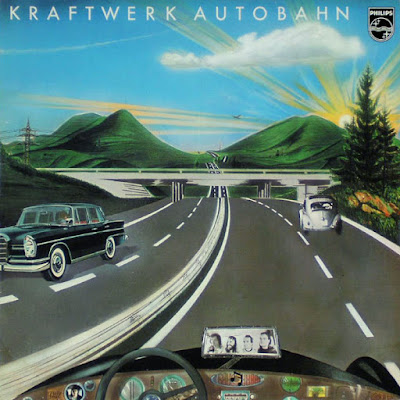 Kraftwerk's fourth album was their first international success, and the first to feature what was to become their trademark sound. For all its status as a landmark in the development of electronic music and as a conceptual masterpiece, it was actually neither of those things; it was the last Kraftwerk album to feature conventional instruments (although they were very much secondary to the synthesiser and electronic percussion) and only the epic title track can be considered conceptual. It was really the work of a band in transition, and heralded the arrival of two key players in the band's development over the next few years - drummer turned electronic percussionist Wolfgan Flur and sleeve designer and occasional lyricist Emil Schult.
The title track evolved from a journey down the autobahn in a grey mercedes with a tape recorder picking up the sounds of the traffic. Kraftwerk's hommage to the enormous highways criss crossing Germany's industrial heartland was considered controversial in some quarters. The autobahn was a legacy of the Third Reich, an episode in recent history that German popular culture had so far avoided confronting. This was a good indicator of what was to come - Kraftwerk were always aware of the darker, more sinister aspects of the high tech, industrial world that they wrote about, and their work was full of ambiguity, subversion and ominous warnings. The piece itself combines found sounds with a motorik beat (something they had in common with Neu!, who had worked with Kraftwerk shortly before this album) and almost classical melodies. The 'fahn fahn fahn' refrain (it means drive drive drive) is a sly nod to the Beach Boys, and bits of guitar and flute add a human element to the almost robotic feel of much of the track. As other reviewers have noted this track is hypnotic and trance like, and it actually feels like you're driving a brand new car on a new, perfectly smooth motorway.

The second half of the album is purely instrumental, and shows a gift for melody that had only been hinted at on earlier albums. Kommetonmelodie 1 is rather sombre, but segues into the gorgeous part 2 which is light, breezy and melodic. Mitternacht is another low key piece, and the album ends with an almost folky piece played on flutes and recorders (the last time purely acoustic instruments would feature on a Kraftwerk album).

Kraftwerk's prog credentials are debatable, but they were a crucial part of the German electronic music scene of the 1970s and remain hugely influential cross many genres to this day. Few bands have combined lyrics, melody, rhythm and visual imagery so intelligently and to such great effect, and they should be considered essential listening for any open minded music fan.
Posted by Zen Archer at 9:36:00 PM