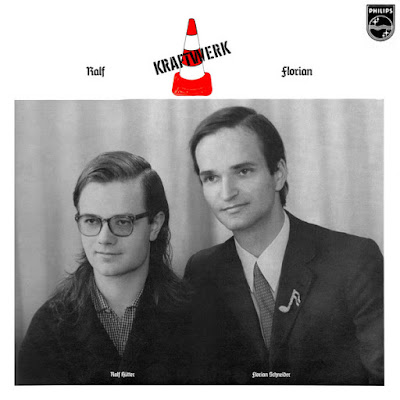 
Their self-titled third album is still the neglected stepchild in the greater Kraftwerk discography, overshadowed on one side (even today) by the raw Krautrock grunge of their earlier 'traffic cone' albums and on the other by the international success of "Autobahn". The namesake duo refuse to even recognize it anymore, and to date have never sanctioned an official CD release, frustrating many older fans in the process.
And yet it was the first Kraftwerk album to formulate anything resembling a genuine group identity. The original cover photo shows the genesis of that immaculate Kraftwerk image, embracing an ironic caricature of German efficiency that would go a long way toward selling the band around the world. Ralf still wore the shoulder-length hair of a precocious chemistry professor, but how many young musicians in 1973 were dressed and groomed as neatly as Florian, complete with nerdy musical lapel pin?

Clearly this wasn't the same team of counterculture vandals who fabricated buzz-bomb attacks on their self-titled debut LP. But for the time being the two were still in the process of shedding their primitive Krautrock epidermis. You can hear it in the crude attempts at real melodic figures, and in the punchier rhythms of "Kristallo" and "Tanzmusik". The latter in particular was a brightly laminated road map to a lucrative future: the most upbeat tune so far in their rapidly evolving catalogue, and yet still disarmingly German (if that isn't an oxymoron).

And then there's the (almost) side-long "Ananas Symphonie", an evocative tone poem to swaying palm trees and undulating native girls, strikingly out of step with other German music trends at the time. The track doesn't really arrive anywhere after nearly fourteen minutes, but like the whole album it can be a very pleasant journey, and for Ralf and Florian the song was another confident step away from the labored Teutonic experiments of the past.

Maybe the two were later embarrassed by the low-tech clutter of their home studio, as it appeared in 1973 on the album's rear sleeve. Or maybe turning their collective back on the past was a calculated ploy to increase the cult appeal of those anomalous early efforts. Either way it's a shortsighted attitude: the sleek computer world of future Kraftwerk wouldn't look the same without the man-made nuts and bolts of makeshift analog albums like this one.
Posted by Zen Archer at 9:31:00 PM