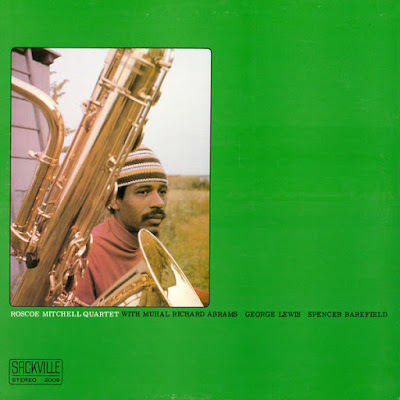 Recorded in concert at A Space, Toronto on the 4th
and 5th of October 1975.

The album documents a two nights performance promoted by saxophonist and journalist Bill Smith, co-founder of Sackville Records, at A Space, an artist-run gallery in downtown Toronto.

The quartet is a chamber-like ensemble composed of Mitchell, pianist Muhal Richard Abrams, co-founder of the AACM, trombonist George Lewis, a 23-year-old in his debut recording, and Detroit-native guitarist Spencer Barefield.

Mitchell is strongly associated with the influence of "classical" avant-garde, both European and American. If the Art Ensemble of Chicago formed a key part of Mitchell's expression, this band and later versions of their Sound Ensemble would permite him to emphasize the purely sonic interest of his earlier work.

Mitchell recorded the piece "Tnoona" previously with the Art Ensemble of Chicago in 1973 for the Fanfare for the Warriors album, where Abrams was also present. "Music For Trombone & B Flat Soprano" is a duo credited to Lewis. "Cards", a piece in which each player is given six cards with musical notation that can be arranged in any order and any tempo, demonstrates Mitchell's interest in chance procedures and the radical dismantling of form in the manner of John Cage. "Olobo" is performed as a trombone solo by Lewis.

In 2013 Delmark Records, which purchased the catalog of the Sackville label, reissued the album under the title Live at "A Space" 1975 augmented with 20 minutes of previously unissued material.[4] The four bonus tracks include a reading of John Coltrane's classic ballad Naima with an extensive prelude, and a short ensemble version of his signature piece "Nonaah", which Mitchell originally wrote as a solo saxophone before the Art Ensemble played it also for Fanfare for the Warriors.

In his review for AllMusic, Brian Olewnick states about the original album "Roscoe Mitchell Quartet is a long-neglected minor classic and well worth hearing"[5] The All About Jazz review by Hrayr Attarian says about the Delmark reissue that "listening to this exquisite disc is, without a doubt, demanding but it is also a rewarding and thrilling aural and intellectual ride. 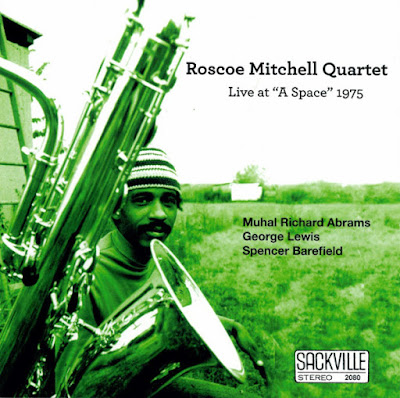 Only the most modern of listeners will be able to get with this 38-year-old music. Its barriers to entry are extreme. It comes from two nights in 1975 at A Space, an artist-run gallery in downtown Toronto which, in 2013, is still open for business. Four of the eight tracks were released on the Canadian Sackville label, on LP in 1976 and on CD in 2002; four tracks are previously unissued. The band is Roscoe Mitchell (reeds); George Lewis, a 23-year-old in his debut recording (trombone); Muhal Richard Abrams (piano) and Spencer Barefield (guitar).

In 1975, Mitchell’s primary affiliation was the Art Ensemble of Chicago. The quartet at A Space has more in common with the European and American classical avant-garde. Lewis’ blats in the right channel sound entirely disassociated from Mitchell’s chirps in the left. It is startling when seemingly random utterances coincide and the two arrive at rough unisons. Barefield does not “play” the guitar but occasionally inserts motivational strums or vivid configurations of color. Abrams is the voice of reason, picking his spots, spilling beautiful, comprehensible effusions between and around Mitchell and Lewis.

In these stark sonic landscapes, there are almost no melodic or harmonic or rhythmic plotting points. Most of the whirring and murmuring on “Tnoona” cannot even be identified by instrument. Yet there are moments of epiphany, when irrational gestures, emerging from silence, gain access to previously inaccessible regions of the subconscious. Some of the experiments fail: “Olobo” simply lays there, inert, an interminable 10-minute trombone solo.

The first two tracks, new to the world, are valuable discoveries. “Prelude to Naima” contains fragments of Coltrane’s song, dramatically slowed to an episodic nine-minute contemplation, outside time. It dawns like breaking light when it becomes, for three minutes, the actual “Naima,” rapt and obsessed.

The Canadian label Sackville released a series of exceptional albums throughout its forty plus year existence. A fair number of these document free-jazz concerts by American luminaries that took place in its hometown of Toronto. When the company folded, Chicago based Delmark purchased its Avant-Garde catalogue and has released expanded versions of these records on CD.

One such gem is reedman Roscoe Mitchell's Live At 'A Space' 1975 now augmented with 20 minutes of previously unissued material. Mitchell, known for his association with the groundbreaking quartet, Art Ensemble Of Chicago and the Association for the Advancement of Creative Musicians (AACM) leads an inspired quartet in front of an appreciative audience.

An improviser par excellence Mitchell is, and has always been, a contemplative and sophisticated instrumentalist. The most melodic track, "Dastura" features his haunting saxophone blowing wistfully over Detroit guitarist A. Spencer Barefield's classically influenced, single notes and strums. The deft utilization of silent pauses during this intense and intimate spontaneous duet brings a sense of mystical poetry to the dialogue.

This is Lewis' debut recording and he is already a mature and inventive player. His unaccompanied, ten-minute long extemporization on "Olobo" has him expressively exploring the entire range of his instrument, not only musically but also stylistically. Abrams' demonstrates his trademark progressive angularity on a passionate and unfettered cascade of piano lines on "Prelude to Naima." This is followed by saxophonist John Coltrane's classic "Naima" that Lewis and Mitchell play in unison, like a somber dirge.

Listening to this exquisite disc is, without a doubt, demanding but it is also a rewarding and thrilling aural and intellectual ride. The superb sound remastering enhances the experience of rediscovering this historic session.
Posted by Zen Archer at 4:38:00 PM