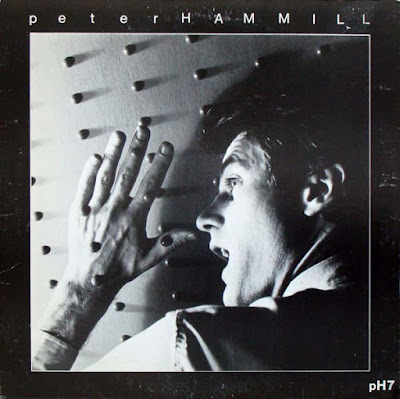 
While an acidic pun also, this album's title certainly gives the important information that this was Hammill's seventh solo album. And the first one (maybe second) recorded after the final VdGG break-up (until very recently that is), and the first one to be done completely free previous influences.
By this time, his friendly musical mutual admiration, made him and Peter Gabriel's path cross many times around that period or shall we say era! Era due not only our archangel Gabriel, and Robert Fripp but Brian Eno also, from the more glam rock scene of prog (those musically close to Bowie and its androgynous music), but to the other side of the pond, this lead to the Talking Heads and others, but also Hammill himself were all busy "electronifying" prog rock. This would then lead to the 80's music scene that was simply partly the result of the push the Artistes (with the big A) mentioned just above influenced tremendously with all of its excesses. If I am going through this general overview, it is because this scene was actively challenged by Peter's seventh album.

But the usual Hammill is still present also, listen to Mirror Man to see if Hammill 's shot at Bowie melodies (Five Years style), but also a more solemn hymn-like Handicap And Quality, definitely one of the most grandiose-sounding raconteur troubadour rock song Hammill wrote. Poignant lyrics and majestic Jacques Brel-like vocal delivery (pure compliments, Peter!!!!) make a spine-chilling moment, because this also appeared clearly the case in the following Not For Keith (Ellis, most likely).

On the other side of Peter's universe are the definitely experimental edges where he stretched his voice "to places it was not necessarily supposed to be natural " (sic) and this attitude translated to his music also and stretched to making it sometimes aggressive (and challenging) to the more discerning prog fan. Careering, Porton Down, Old School Tie and Mr. X are typical examples. A few tracks in this album are very subtly pointing towards Eno, or Krautrock too (Imperial Walls for ex.).

Certainly a departure from his old group's music Zone, rather challenging at times and yet another worthy Hammill album with its strengths and weaknesses.
Posted by Zen Archer at 3:52:00 PM