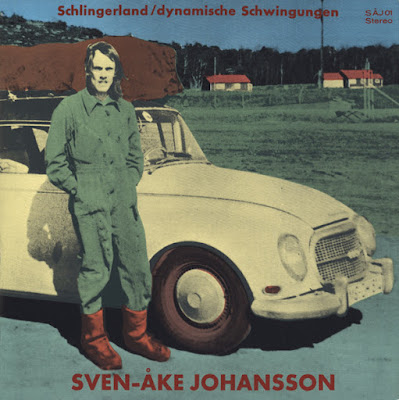 Recorded in October 1972 in Stockholm, Sweden.

Solo free improv drum recordings tend to send most jazz fans scurrying for cover. But for the bold, there are some sweet exceptions. Sven-Åke Johansson's 1972 record Schlingerland presents just the man and his drum set, and it's a fascinating listen. Johansson seems intent on exploring the polyrhythmic possibilities of his kit, building up percolating rhythms and then subtly altering them over time. A lot of this music embodies aspects of the West African drumming tradition: Johansson overlays asymmetric drum patterns, adding and subtracting beats, dynamically changing emphasis, constantly engaging in an abstract call-and-response motif.
Johansson made this record during a time when solo drum improvisation was in its infancy (to the extent that it's widely accepted even now). Schlingerland went through reincarnations on Johansson's own label, SÅJ Records; on the SAJ imprint of FMP; and finally now on Atavistic's UMS free jazz reissue series. Despite its age, the recording has decent sound quality: independent components of the kit are well-resolved, with warmth and body. The stereo image tends to be obscenely broad, but that's a fair price to pay in order to follow Johansson's busy trapwork.

Sven-Åke Johansson's tenure with Brötzmann, Schlippenbach, and other giants of European free improvisation had already demonstrated his fluency by the time he made this record, but in the solo context he has the unique opportunity to follow his muse—undistracted by the powerful ebb and flow of group improvisation. While much of Schlingerland consists of pulsing & pounding beats, scattered moments of quiet reflection assure the listener that every note is intended. A unique document, Schlingerland fills a gap in the documentation of '70s European improvisation. At the same time, it retains a surprisingly contemporary sound which reverberates in the ear, mind, and heart of the 21st century listener.
Posted by Zen Archer at 3:21:00 PM