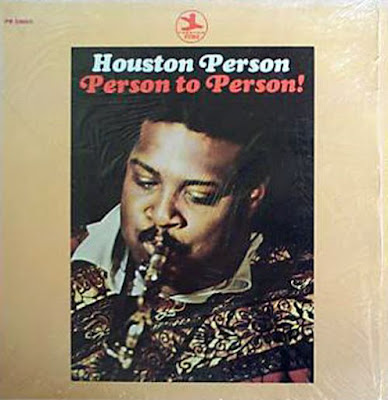 Person to Person! was Houston’s eighth album. It saw Houston’s sound continue to evolve. There was a move away from the soul-jazz sound. Replacing it, was a much more soulful sound. It came courtesy of an all-star band.

Bob Porter never shied away from bringing in the best musicians to accompany Houston. For Person to Person!, he brought in drummer Idris Muhammad, bassist Jimmy Lewis,guitarist Grant Green and Hammond organist Sonny Phillips. They played their part in the further reinvention of Houston Person.

On the release of Person to Person! in 1970, the album divided the opinion of critics. Some were surprised at the change in sound. However, Houston realised the importance of never standing still. This became even more apparent on his 1971 album Houston Express.
Posted by Zen Archer at 11:05:00 PM 1 comment: Links to this post 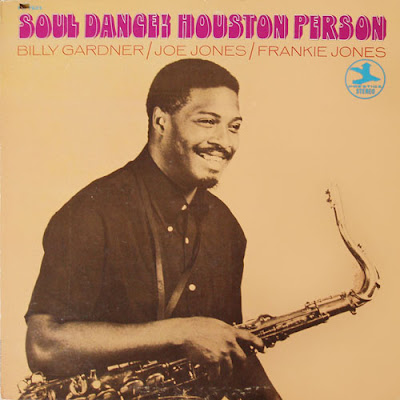 
Houston’s first album of the Bob Porter era was Soul Dance! Released in 1969, Soul Dance! was hailed as Houston Person at his finest as he combines ballads, blues and soul jazz. Good as Soul Dance! was, Houston trumped it with Goodness!
Posted by Zen Archer at 10:48:00 PM 1 comment: Links to this post 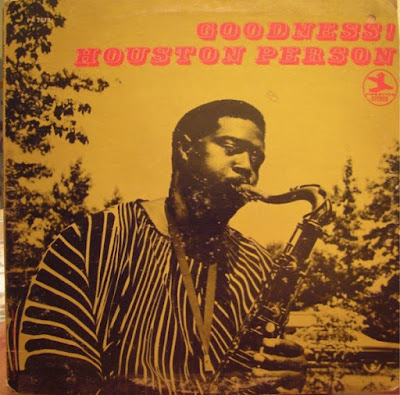 Tenor saxophonist Houston Person was still a relatively new name at the time he recorded this set, his sixth session for Prestige. The funky music (which includes the hit title song) emphasizes boogaloos, danceable rhythms and repetitious vamps set down by the rhythm section (organist Sonny Phillips, guitarist Billy Butler, electric bassist Bob Bushnell, drummer Frankie Jones and Buddy Caldwell on congas), but it is primarily Person's passionate tenor solos that will come the closest to holding on to the attention of jazz listeners. The music is generally quite commercial and is certainly not recommended to bebop purists, although it has some strong moments. But overall these performances succeed more as background music than as creative jazz.
Posted by Zen Archer at 10:38:00 PM 1 comment: Links to this post 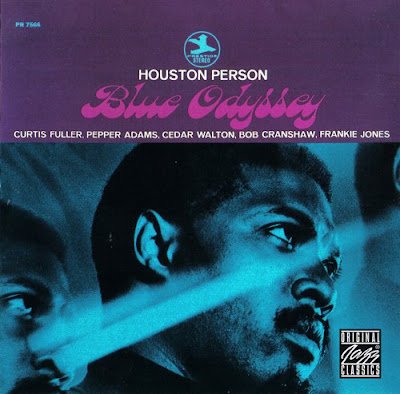 
In 1968, Houston released his fourth album Blue Odyssey. It was hailed the finest album of Houston Person’s career.  Despite this, Blue Odyssey Trust In Me struggled to find an audience. For Houston and Prestige Records, this was a worrying time.

The appointment of Bob Porter as the new A&R man at Prestige Records solved the problem. He realised that for Houston’s first four albums, Prestige Records had struggled to find a sound for Houston. Bob who had an intimate knowledge of the club scene, realised Houston needed to take his live sound into the studio. Surrounding Houston with some of the best session musicians, his career took off.
Posted by Zen Archer at 10:35:00 PM 1 comment: Links to this post

Houston Person
1967
Trust In Me 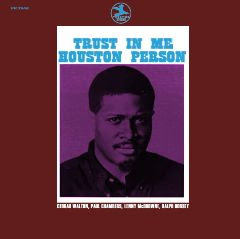 
Houston Person is generally considered a soul-jazz specialist whose tenor playing can be counted on to elevate a standard organ combo or groove-based session into something memorable. This set, however, demonstrates Person's reach well beyond funk and blues grooves. The CD, combining the 1967 dates Chocomotive and Trust in Me, reveals a multi-faceted player who has grasped the lessons of tenor greats from Coleman Hawkins to Gene Ammons to Sonny Rollins. This explains why when Person sits down with a Johnny Hammond, Eddie Harris, or Charles Earland he has a whole lot more in his bag than blues licks and an assertive tone. Pianist Cedar Walton is a major presence on both sets, providing a powerful, personal approach that falls somewhere between Horace Silver's sublime earthiness and Thelonious Monk's knotty logic. Veteran hard boppers Bob Cranshaw and Paul Chambers share the bass spot. The drummers are lesser-knowns Lenny McBrowne and Frankie Jones. Drummer's drummer Alan Dawson is on the Chocomotive tracks in a rare but effective turn at the vibes. Space limitations mean that "Girl Talk" and "Up, Up and Away" from the original Chocomotive are not on the compilation. On the other hand, the bonus track, a brief outing on Sonny Rollins' "Airegin," serves as a prime example of Person's abilities in a probing, straight-ahead setting. A couple of tracks veer towards a blowsy lounge style, but even on "More" (a song that has not stood the test of time) Person -- with effective work from Walton, Dawson, and Cranshaw -- steers the performance to a swinging place that transcends the tune's inherent cheesiness.

Tough tenors were a staple diet for many jazz listeners in the 1960s. Gene Ammons, Sonny Stitt, Eddie “Lockjaw” Davis, Stanley Turrentine, Arnett Cobb and so many others (the list could literally fill a ledger pages long) took ample measures of blues and soul-derived emotion and combined them with a no-nonsense emphasizing the tenor horn’s naturally sensual properties. While arguably not as well known, Houston Person belongs among their number. Fielding a sassy, vibrato-flecked tone and a biting, soulful lexicon of blues phrases the South Carolina native was custom tailored for the soul jazz market the Prestige brass had him pegged for. This recent Fantasy double feature gathers two of his late Sixties efforts for the label, the woefully dated (at least in terms of title) Chocomotive and Trust In Me. It’s interesting to note the differences in engineering techniques between the two sessions. The first, recorded in New York, has an echo-like studio resonance and brittleness to the drums, which is decidedly absent in the second, taped at the Van Gelder sanctum sanctorum.
Walton is the common denominator between the dates and his tasteful, but often-funky piano works well as the rhythmic ringleader. Alan Dawson, best known as a drummer, adds his skills on vibraphone to the first session and ends up annexing nearly as much solo space as the leader. Person sounds more than willing to defer and his own solos are made all the more emphatic by the resulting economy. Taking flight on a sustained press roll from Jones the band soars through the title track. Cranshaw’s fatback amplified strings vibrate through a brisk solo and Person’s elevated horn resumes its exploration of the firmament. Even the ballad numbers, like “Since I Fell For You” wail as Person injects just the right of tonal grit into lines already saturated with visceral emphaticism. Walton’s gorgeously executed turn on this track, shored up by asides from Dawson’s mallets, sets the disc’s standard for soulful interaction.

The tunes on Trust In Me are shorter in duration, but even more rhythmically oriented. The venerable (at 32!) Paul Chambers takes over the bass chair from Cranshaw and Ralph Dorsey’s simple percolating conga patterns augment the regular traps work of Lenny McBrowne. Standards provide the bulk of blowing material and everyone in the group seems at ease running through the routine changes. Person’s tone is less resounding, in part due to the improved fidelity, and the increased clarity lends his lines even greater potency. Highlights include the brisk opening “One Mint Julep” with another colorful contribution from Walton and the smoldering Latinized romance of “Hey There” where the rhythm section really shines. Person may be considered something of second-string player in the original tough tenor ranks, but this collection denotes that such a distinction still carries considerable weight.
Posted by Zen Archer at 9:31:00 PM 1 comment: Links to this post 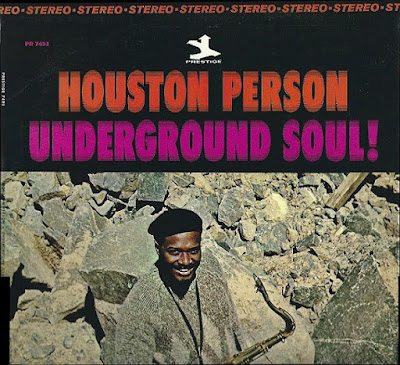 During his tour of duty, Houston was stationed in West Germany. That was when Houston joined the US Army service band. That’s where the soulful sound of Houston’s tenor saxophone made its debut. However, this was no ordinary service band.

The US Army service band that Houston Person joined, featured some future jazz greats. Its lineup featured Don Ellis, Cedar Walton and Eddie Harris, who Houston would later work with. For Don, Cedar, Eddie and Houston, this was part of their musical education. They would return home better musicians. Their time in the service band helped hone their sound, and prepared them for life as a professional musicians. In Houston’s case, his professional debut was on hold.

Before turning professional, Houston, who was born in Florence, South Carolina, on 10th November 1934, decided to complete his eduction. He returned to the Hartt School, at the University of Hartford, Connecticut. Only once Person had completed his studies, did he turn professional.

Boston was where Houston made his home. That’s where he worked with a series of R&B groups. He started playing small gigs and eventually, was spotted by Hammond organist Johnny “Hammond” Smith in 1963. For an up-and-coming musician, this was the breakthrough he had been looking for. Houston was with Johnny “Hammond” Smith for four years. During that period, Houston Person had signed to Prestige Records.

In the sixties, Prestige Records was one of jazz music’s most prestigious labels. It rubbed shoulders with Atlantic Records, Blue Note Records and Impulse. So, signing for a label of the stature of Prestige Records was a sign that Houston was a musician going places. His soulful tenor saxophone was winning friends and influencing people.

When Houston released his first album,1966s Underground Soul!, it received mixed reviews. Critics couldn’t seem to make their mind up about the album. Underground Soul! struggled to find an audience. Prestige Records put this down to being Houston’s debut album. Surely this was just teething problems for Houston Person?
Posted by Zen Archer at 9:21:00 PM 1 comment: Links to this post