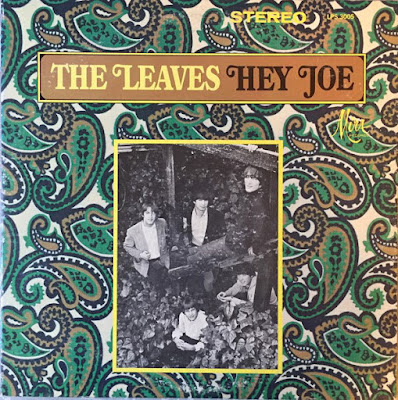 
The Leaves was an American garage band formed in California in 1964. They are best known for their version of the song "Hey Joe", which was a hit in 1966. Theirs is the earliest release of this song, which became a rock standard.

The band was founded by bass player Jim Pons and guitarist Robert Lee Reiner, who were inspired by hearing The Beatles while students at Cal State Northridge in Los Angeles. Originally called The Rockwells, they were fraternity brothers who formed a group and then taught themselves how to play. Besides Pons and Reiner, the original line-up included John Beck (vocals), Bill Rinehart (lead guitar), and Jimmy Kern (drums); in early 1965, Kern was replaced by drummer Tom Ray.

They began by playing surf and dance music at parties. Their first actual show was in the school gym with Captain Beefheart and His Magic Band. In 1965 The Byrds left their residency at Ciro's on Sunset Strip after making their first hit, and The Leaves (as they were by now known) were chosen to replace them. It was there they were discovered by popular singer and actor Pat Boone, who got them their first record contract, with Mira Records.

Their first single, "Too Many People", was a local hit in Los Angeles. The Leaves released "Hey Joe" in November 1965, and dissatisfied with the sound, pulled it. They released a second version in early 1966, which flopped. Original guitarist Bill Rinehart left, and The Leaves redid the song again with a fuzztone by new guitarist Bob Arlin. This version of the song, the best of the uptempo versions, became a hit, hitting No. 1 in L.A. It debuted on both Billboard and Cash Box on May 21, 1966. It peaked at No. 31 on Billboard, while showing a humbler peak position of No. 43 on Cash Box. The song ran nine weeks on both national charts.

Their debut album Hey Joe followed. It took a run on the Billboard charts for 5 weeks, beginning on July 30, 1966, peaking at No. 127. The album did not make it onto the Cash Box charts.

The band appeared on TV shows – American Bandstand, Shivaree, Shebang – and briefly in a Hollywood film, The Cool Ones (1967). One more album, All the Good That's Happening, was released before the band broke up in 1967 when Pons left to join the pop group The Turtles; In the early 70s, Pons played bass with Frank Zappa. Arlin went on to form heavy psychedelic band The Hook and The Robert Savage Group. The band reunited in 1970 before Pons became a member of Zappa's band. The reunited lineup included Jim Pons on rhythm guitar, John Beck on lead guitar, Buddy Sklar, lead singer from The Hook and The Spencer Davis Group, Al Nichols on bass from the Turtles, and Bob "Bullet" Bailey on drums. The band did some touring and performed at local Los Angeles based nightclubs before disbanding in 1971.

A new generation of music fans discovered the band when their version of "Hey Joe" was included in the classic 1972 garage rock compilation, Nuggets. According to the Nuggets liner notes, the as yet unnamed band was hanging around a tree-shaded pool, smoking, when a newcomer gave the traditional 60s greeting, "What's happening?" "The leaves are happening", came the answer, which struck them all as a good name for a band.

One of the first L.A. folk-rock groups to spring up in the wake of the Byrds in the mid-'60s, the Leaves are most remembered for recording the first -- and one of the most successful -- rock versions of "Hey Joe," which reached the Top 40 (and was a huge California hit) in 1966. None of their other releases approached this success (although "Too Many People" was a local hit), but the group recorded a fair number of strong covers and original songs during their brief existence. More explicitly Stones and Beatles-influenced than the Byrds, they didn't project as strong an identity as competitors like the Byrds or Love, despite displaying considerable talent for harmony rockers in both the folk-rock and British Invasion styles. After cutting some singles and an album for the tiny Mira label, they moved to Capitol and disbanded after a disappointing follow-up (All the Good That's Happening, 1967) that offered less distinguished material and a more diluted sound. Leaves bassist Jim Pons went on to join the Turtles for a while in the late '60s.

Email ThisBlogThis!Share to TwitterShare to FacebookShare to Pinterest
Labels: The Leaves, USA