Rusty Bryant
1974
Until It's Time For You To Go 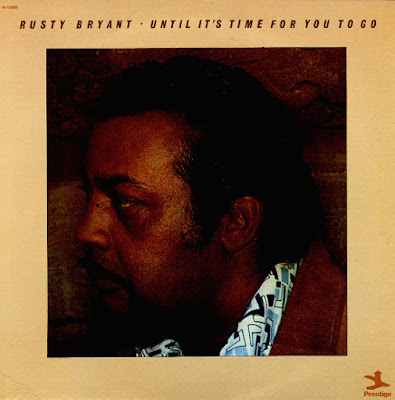 
Contrary to what jazz purists would have listeners believe, making jazz relevant to popular music isn't necessarily a bad thing -- everyone from Glenn Miller to Grover Washington, Jr. and Hank Crawford have demonstrated that it can be done tastefully. But at the same time, it is hard to have any respect for albums that contain outright elevator Muzak and claim to be jazz. So when you're evaluating what is good commercialism and bad commercialism, it is best to avoid sweeping generalizations and make your evaluations on an album-by-album or artist-by-artist basis. Produced by Bob Porter in 1974, Until It's Time for You to Go is an album of tasteful commercialism. Bop snobs and jazz purists are not the target of this LP, which Fantasy reissued in 2002 on a 70-minute CD that also contains 1973's For the Good Times. Rusty Bryant fuses jazz with soul, funk, and pop, but he does so in a creative, gutsy fashion. If you appreciate the soul-jazz that Washington, Charles Earland, and the Crusaders were coming out with at the time, you can appreciate where Bryant is coming from on funky, groove-oriented offerings like "Ga Gang Gang Goong" and "The Hump Bump." Another highlight of the record is the title song, a Buffy Sainte-Marie ballad that Bryant dedicates to tenor titan Gene Ammons (who was dying of cancer). This is not an album of wimpy elevator Muzak; whether he is on alto or tenor, Bryant's playing is gutsy and substantial. And even if some of the material is over-arranged, Bryant still gets in his share of meaty solos. Not everything that Bryant recorded in the '70s was great, but Until It's Time for You to Go is among the late saxman's more memorable albums of that era.
Posted by Zen Archer at 4:45:00 AM