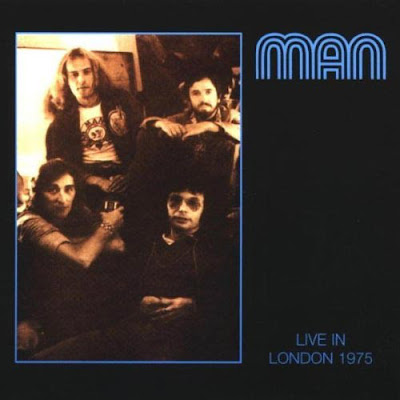 
My first musical encounter with this Welsh band was when I watched the German television programm Beatclub, I was impressed by their dynamic sound and frequent solo escapades. Soon I bought Man Live At The Rainbow 1972, recorded in the famous venue The Rainbow that hosted bands ranging from Queen and Rory Gallagher to Marillion. The running time on this CD is one hour and the tracks are between around ten and twenty minutes. The first song C'Mon is mainly rooted in the bluesrock tradition with some psychedelic hints, their sound is somewhere between Wishbone Ash and the early Nektar. The other tracks are loaded with the powerful and distinctive Hammond organ: the catchy Bananas, the wah-wah drenched Love Your Life (culminating in the Spunk-Rock jam) and the pure rock and roll in Life On The Road. To me this albums sounds as a pleasant dive into the wonderful Seventies, recommended to fellow Hammond organ aficionados!
Posted by Zen Archer at 11:46:00 PM