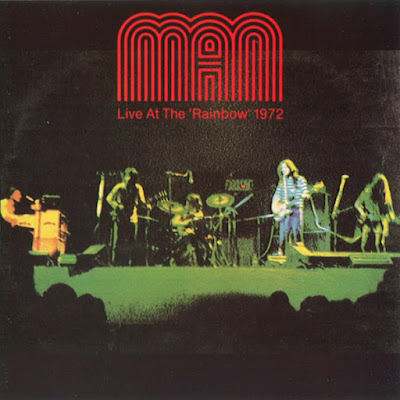 Man were/are one of those bands that were made for playing Live. Never a band for playing their studio cuts note for note, they transformed them into extended jams making each performance of interest to their fans and therefore the reason why so many Live Man albums have been made available over the years. In fact there are more Live Man albums available out there than studio excepting compilations. Live in London with the exception of two tracks is taken from a 1975 BBC In Concert recording and captures the band at the Paris Theatre at their commercial peak. Not that Man really had a commercial peak as such, never hitting the mainstream in terms of commercial success but they did release two studio albums around this time (Rhinos, Winos and Lunatics and Slow Motion) aimed at making the band more accessible. In fact Rhinos was even produced by Queen producer Roy Thomas Baker. Fans of the bands more Psychedelic Rock need not worry though because although the band do take a more streamlined Rock approach on many of the tracks here there is still room for some extended jamming.
A ten minute version of 7171-551 kicks off the cd and it's as good a version as you'll here anywhere else. An excellent opener, which really powers along and some great soloing from Guitarists Deke Leonard and Micky Jones. Two tracks feature here from their latest studio album at the time, Slow Motion. As already mentioned this was a more commercial straight Rock sound for the band and the versions of Hard Way to Die and Day and Night are done justice here. In fact the former features some nice harmony vocals which the band manage to recreate Live to good effect.

Of interest to Man completionists are two tracks that never made it to studio albums, namely Breaking Up Once Again and Someone is Calling. Both capture their more commercial Rock sound and are good without being spectacular. For those preferring the more Psychedelic Man though we are treated to an excellent nine and a half minute version of Many are Called But Few Get Up.

The two tracks from a previous performance (and different line-up) fit in quite well here and don't seem out of place with the rest of the album. Life on the Road Rocks along with a mid paced shuffle and Brazilian Cucumber Meets Deke's New Nose comes across as more of a jam and is the weakest track on the cd. It features Man roadie Vyv Morris on vocals although he talks rather than sings.

So overall a good Man live album, not their best but certainly not the worst and worthy of Three and a Half stars.

As a footnote for those who are interested in the line-up of the band on the different tracks here. On the BBC In Concert we have Guitars/Vocals Deke Leonard and Micky Jones, on Bass Ken Whaley and on Drums Terry Williams. On Life On The Road and Brazilian Cucumber Meets Deke's New Nose the line-up was Jones and Williams with on Guitar Clive Johns, on Bass Will Youatt and on Keyboards Phil Ryan.
Posted by Zen Archer at 11:39:00 PM