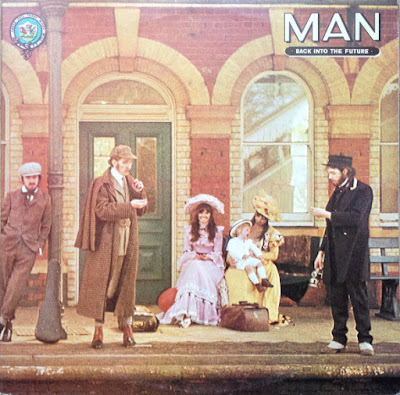 Considering that Man were given just a matter of weeks to come up with a new album following the surprise success of both previous studio album 'Be Good To Yourself At Least Once A Day' and the live offering 'Christmas At The Patti' it's a wonder the Welsh psych-rockers came up with something so good. And so long. A double-sided affair, 'Back Into The Future' mixed new studio tracks with live recordings and found the group on top form with both. The line-up of Micky Jones(guitar, vocals), Tweke Lewis(guitar), Phil Ryan(keyboards), Will Youatt(bass) and Terry Williams(drums) had just finished a tour of Germany and, by all accounts, had very little to work with upon entering the studio. However, despite the perceived difficulties surrounding the sessions and the tight recording schedule imposed by the label the group managed to fashion an impressive set of upbeat, good-time tracks that combined the usual flavours of acidic guitars, spiky keyboards and West coast- style harmonies. Although mainly rather brief-in-length, 'Back Into The Future' features some great Man workouts, the bouncy 'Just For You' blending woozy keyboards and slick vocal harmonies, 'Never Say Nups To A Nepalese' showcasing a nice line in dopey humour and a bravura, nineteen-minute-long live version of stone- cold classic 'C'mon'(from 'Be Good To Yourself At Least Once A Day') capturing Man in their natural live habitat and close to their scintillating best. Most of side two - taken from a 1973 performance at the Roundhouse, London - concentrates on more material from their previous studio effort, and yet again the playing is exemplary, as featured on the breathtaking, guitar-solo-heavy rendition of 'Spunk Rock '73'. Whilst previous Man studio efforts, and indeed future ones, would find the group struggling to replicate their live energy within the confines of the studio, this 1973 release bucks the trend, which may well be a result of having to get the goods in the can so quickly. There's a real lively feel to much of 'Back Into The Future' and those you have yet to explore the delights of 'the Welsh Grateful Dead' as they are so often called(the 'Welsh Quicksilver Messenger Service is probably more apt) then this is as good a place as a any to start. A rollicking, fun-time ride, this is very much a career high for all involved.
Posted by Zen Archer at 9:50:00 PM