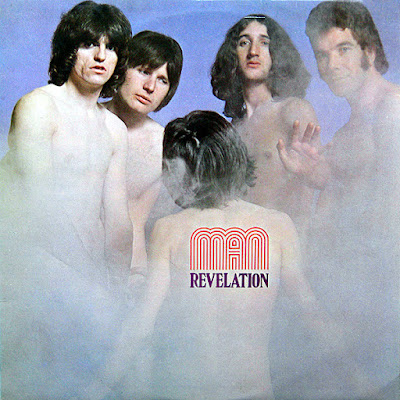 
MAN formed in the Swansea area of Wales from the ashes of the mid 60s harmony pop outfit, The Bystanders, and another local band The Dream. The two fused together, and became a more progressive outfit, signing to Pye Records. Their debut album, 'Revelation', being a fully fledged concept album. However, this gained little momentum and they shifted to Pye's 'progressive' imprint Dawn for the more experimental '2 Ozs of Plastic With A Hole In The Middle'. This made about the same amount of impact, and they changed labels entirely for their third eponymous album that was released on Liberty. Rather typically by now, this also didn't exactly set the world alight.

It was only when they signed to United Artists, which had re-established itself as a prominent prog label at this time. A run of very popular albums started from 'Do You Like It Here Now? Are You Setlling In' in 1971 through to the live album 'Maximum Darkness' in 1975. However, again their fortunes started to dwindle and after a few less successful albums for MCA they split. However, a short term reunion in 1983, and another in the early 90s which has continued to this day, has kept the band alive, despite the fact that pretty much every album has never featured the same line up twice!! Nowadays the band is led by the bass player Martin Ace, who has been an on/off member since around 1970.

Their best work is represented by '2 0zs Of Plastic With A Hole In The Middle', 'Be Good To Yourself At Least Once A Day' and 'Rhinos Winos and Lunatics'. The first two represent space rock at its best, and the latter one shows a more structured approach yet some of their finest songwriting is on that album. However, space rock fiends cannot go wrong with their original 1969-1977 run of albums.

This is where it all started for Man, way back in 1969. The band evolved from the pop-centric group The Bystanders with a clear ambition to explore some of the exciting new territories which were opening up as music entered one of the greatest periods in its entire history. In what has become one of the great traditions of prog, Man dived straight into a full blown concept album, the theme being the development of man.

These days, it is all but impossible to listen to the opening track "In the beginning.." without being reminded of Spinal Tap's "Stonehenge". I challenge anyone not to imagine dwarves dancing round a 12" lump of stone as the track plays.

Liberal sound effects are used throughout the album to embellish what are otherwise ambitious but variable blues rock numbers. There is a rather jarring contrast between the final vestiges of The Bystanders on pop rock songs such as "Empty room" or "Love" and the heavier and less melodic tracks like "Sudden life". The former ("Empty room") actually sounds like a strange fusion of The Doors, Rush and the Mamas and The Papas!

The first real hints of anything potentially prog we get are on "Puella! Puella!", which features some nice flute touches and effective harmony vocals. The recording of "Erotica" appears to have involved a dark room and committed role playing, the results being released successfully as a single in the more liberated parts of Europe. The underlying music is of the dreamy 60's acid party type.

"Blind man" is a straightforward blues rocker, or so it seems until the track completely changes for the closing minute or so which comes across as a crossed wire from a Demis Roussos album. Later tracks such as "And the castles rise in children's eyes" and "Don't just stand there" have suggestions of bands such as The Nice, and Beggar's Opera, the organ playing of Clive John being rather Emerson like at times. The album concludes with a space landing and an atomic explosion.

In all, a refreshingly innocent Man album, which sees them exploring a number of styles and sounds they would quickly discard. The overall impression can at times be one of clumsiness, but we must keep in mind that this goes way back to the origins (of Man) in 1968/9, and as such should not be compared with their most revered albums.

Incidentally, the sleeve image was not originally intended to be so basic, the idea was to see the band naked in the desert on the front, and smartly dressed in the city on the back.
Posted by Zen Archer at 9:10:00 PM