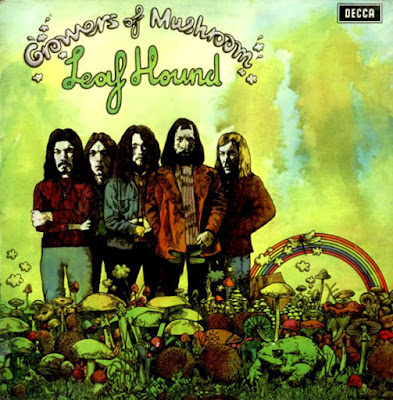 Leaf Hound is one of the literally dozens (seemingly hundreds?) of groups that arose from the late 60's "Progressive Blues" scene in the UK, who then went in a heavier direction as the style of the times changed in the early 1970's. Most of this particular group were formerly a more properly "bloozy" outfit called The Black Cat Bones whose sole 1970 album "Barbed Wire Sandwich" almost certainly inspired Spinal Tap's "Shark Sandwich". Leaf Hound's particular corner of the rock family tree also includes cross-references with members of such other sub-luminaries of the day as Atomic Rooster, Cactus, Foghat & Free. Later singer Pete French would audition for Deep Purple & Uriah Heep, but lose out to fellow journeymen like Dave Coverdale and John Lawton.

So knowing all this you shouldn't have too much difficulty pre-supposing what Leaf Hound is gonna sound like: succinctly in two words, "LED ZEPPELIN." Only dumber, cruder, uglier, and generally lacking any notion of subtlety (as the blatantly druggy band & album titles would suggest.) Except when they sound like The Who or Black Sabbath or Uriah Heep. Actually, the band they keep reminding me of the most is Sir Lord Baltimore -- there almost seems to be some subliminal transatlantic psychic link between these two groups, who would have been recording their debut albums at about the same time (so I don't see how one could have directly borrowed anything from the other. Unless someone can find a link between them we must assume that the times REQUIRED music like Leaf Hound & Sir Lord Baltimore, and thus it was summoned forth from all corners of the globe. Just like a whole bunch of different guys all invented radio at about the same time in different parts of the world.)

"Freelance Fiend" kicks things off in fine style with a scrungetastic Baltimoresque riff and a funky cowbell (can never get too much cowbell now can we?) French does his mushmouth macho manboy yowling bout "I'm gonna live my life like a freelance fiend / build all my castles on top of my dreams!" Mick Halls' lead guitar work throughout the album is a bit on the trebly-needly side, and he's certainly no Louis Dhambra. What makes this one is the Sabbath-like aural blending of low rhythm guitar & massive bass tones locked in on a grind-o-matic machine riff. In other words, METAL!

"Sad Road" is driven by acoustic guitar strumming over that fat-tastic bass, rocking it in the style of The Who's "The Seeker." More wah wah wangdoodle & predictable bloozoid lyrics delivered with mushmouth melisma.

"Drowned" features a grinding circular riff that keeps on going, yet more sub-Mick Box wah wah soloing, and the first uncomfortably Zeppelinish moments in French's redline blues howling which bears more than a little resemblance to Zep's "Ramble On."

"Work My Body" is an evil creepy jazz-blues type of thing, somewhere between "Planet Caravan" and The Doors. Again the guitar heroics are a bit strained and for the most part the lyrics are silly sexo rapping, but the massive coda riff with organ sounds cool (hello, Uriah Heep!) and on the whole this winds up being one of the more distinctive sounding numbers on the record.

"Stray" bears an eerie resemblance to Sir Lord B's "Woman Tamer" riff, which is to say both sound a bit like Zep's "Heartbreaker" thrown in a blender. The relentless riff only ever pauses for big bad drum fills (hello, Bill Ward!) and a brief psychjazz bridge. More early 70's metal heaven.

"With A Minute To Go" uses the acoustic guitar & rumblin bass approach again, adding some shimmery powerchords to make me think of The Who's "Naked Eye" this time -- that is until the descending riff at the end where French nicks the melody & cadence of Bob Plant's "well the wind won't blow and it really goes to show uh woah woah woah" right down to the umlauts.

The title track of the album is the goofiest thing here, a taut little 2 minute multi-sectioned pop operetta in the vein of The Who's "Happy Jack" or maybe MC5's "Human Being Lawnmower". It's also the most blatantly druggy number here, he keeps repeating "nobody could tell we were growing some mushrooms!" but with verse lyrics like "my life was a beetle that ran down the wall!" one has to wonder.

"Stagnant Pool" is some gawdamn effing METAL, in fact I can't imagine this was inspired by anything less that the previous year's smash hit single "Paranoid", as they've got the same locked-in machine grind chugga-chugga going on here. However, it's got lots more parts to it than the Sabbath song, including one riff that again is eerily similar to the climactic riff of Lord Balty's "Caesar LXXI" -- as well as another bit that sounds so much like the Jefferson Airplane you expect to hear Marty Balin's sweet tenor floating by instead of Ol' Raspy there.

"Sawdust Caesar" whoops it up and makes a fine ending to the original LP. Shambolic whiteboy lumbering funk with MORE COWBELL!!! that is just plain irresistable. Mick's guitar solo is also his looooosest playing on the record, making this track another of the highlights.

The first CD bonus track "It's Going To Get Better" is pretty useless, a piano-driven ballad that sounds like another band entirely. Reminds me of mid-70's Guess Who (not in a good way.)

"Hip Shaker" is much better though, sounding like a garage band pastiche of the Faces and Humble Pie. The bashing post-gogo boogie metal groove is happenin', so who cares that the lyrics are simple-minded "hip shaker / love maker" nonsense.

Doing research for this review* I've come across quite a few other reviews of Leaf Hound already out there in Internetland, most rife with cliches about "bludgeoning riffs" and superlatives to make you think Leaf Hound is the hottest shit you've never heard before. I dunno, on the one hand it's nothing original and not all that superlative as far as he-man guitar histrionics go -- but I must admit if you were to ask me to make a list of five albums which fit well with the phrase "bludgeoning riffs" this would probably make it. Which is to say if you can't get enough vintage 1971 proto-metal crunch, here's another platter to add to your Unsung diet. But if 70's stoner cock-rock is not your bag, save your drachmas for some other din. 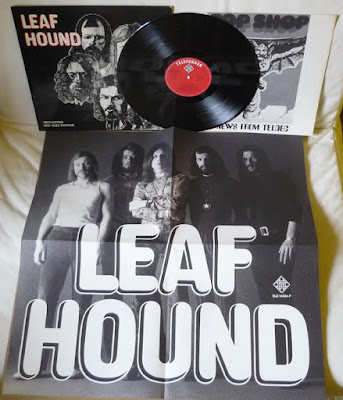 Leaf Hound's music first saw release in Germany in 1971 on Telefunken (where they did a lot of touring; this self-titled "first" album was the same as "Growers of Mushroom" minus a couple tracks.) Later the same year the album was released in their UK homeland by Decca, with nine tracks as shown above (didn't make it across the pond I don't think.) The CD reissue on the See For Miles label includes the 2 bonus tracks listed above. This same label has also reissued the aforementioned "Barbed Wire Sandwich" LP -- which I'venot heard, but the album cover to that one is even more hideous than "Toe Fat"! Hard to resist! Lawd help me, I think I have a problem!


* Here's a factoid mentioned in almost every review, so I'll repeat it here as well: the band's name & most of the song titles on the album are taken from an anthology of horror stories by Herbert Van Thal.