Moondog
1953
Moondog and His Friends 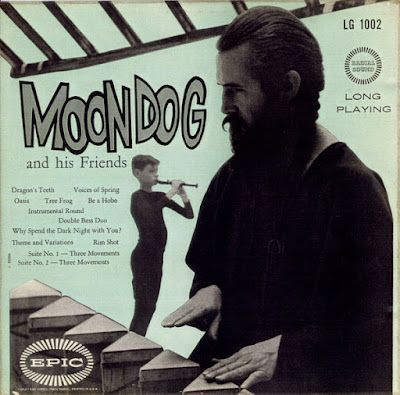 Cover Notes
The music in this collection constitutes a series of tonal pictures with new sound variations and new tempo variations. The composer, and primary performer, is the tall, bearded musician, familiar to Manhattanites, by the name of Moondog. Although some of the melodies, and some of the tempi, are immediately congenial, their full flavor comes out on repeated listenings. This is complex music, with a sophistication that belies its seeming simplicity. Repeated hearings bring out further interesting combinations of sound, other subtleties of rhythm. Moreover, for all its apparently experimental technique, it is solidly grounded in classical forms, the most common being the round.

Moondog was born Louis Hardin, in Marysville, Kansas, and grew up in the west, where the percussion instruments of Indian tribes fascinated the boy. A chief named Yellowcalf taught him much about the manipulation of the instruments. When he was sixteen Moondog lost his sight, but took up the study of music at a school for the blind, learning theory as well as such instruments as the violin and viola. In 1943 he moved to Manhattan and began developing his own theory of music - sometimes referred to as "snaketime," because of its undulating sound - but went west again in 1948, to Arizona, studying again with the Indians. A year later he returned to New York, and began playing his unique instruments - many of his own construction and arrangement - on street corners.

This may seem a difficult way to propound a musical theory, but before long his ideas were seized upon by ranking professional musicians, who were fascinated by both the music and the musician. Particularly in the environs of Carnegie Hall are his theories respected, and in this collection many of the stringed instruments, the violi and 'celli, are played by members of the Philharmonic-Symphony Orchestra of New York. Perhaps the surest way to get at the heart of the music is to listen to it. These recordings, featuring Moondog, represent some of his finest compositions, and some of his most ingratiating ideas.

Dragon's Teeth: This number serves to introduce the trimba, a series of ten drums, triangular in shape, used in graduated sizes. Here the various rhythms of snaketime are introduced, beginning with 1/8 and moving up to 9/8. In the background, the composer's wife may be heard on the oo, a triangular instrument that sounds somewhat like a harp.

Voices of Spring: This is a short rhapsody of sound, using a background of sparrow's voices. Moondog recites a brief quotation on nature, and then plays a freely organized theme on the recorder.

Oasis: The coloring of this selection is predominantly that of Asia Minor, with a fascinating rhythm background. The instrumentation consists of piano, violin, the dragon's teeth (or trimba), the maracas and the uni. The uni is a seven-stringed instrument that can be plucked like a harp, struck with a mallet, like a piano, or played with a bow. It is this instrument that provides the provocative twanging sound. The violin and piano parts, incidentally, are played by two of the country's best young concert artists.

Tree Frog: This is an attempt to recreate in music the song of tree frogs in spring. A descriptive piece, its unique sound is produced by tapping the fingers against the openings of a recorder, with the microphone close-up. No air passes through the recorder in this unusual instance of a wind instrument used percussively.

Be a Hobo: This short song is a vocal round, with the composer singing both vocal lines. Here, as in most of the other selections, the counterpoint is evident. The melody itself, like most of Moondog's materials, is unpretentious, serving as a springboard, so to speak, for his metric experimentation, but nevertheless has a charming, sweet line that carries the music forward.

Instrumental Round: This is an experiment in orchestration, using strings, brass, woodwinds and percussion. All instruments are played by the composer himself, using tape recording.

Double Bass Duo: The genesis of this composition reflects the free, eclectic spirit of much of the music in this collection: the composer, having just bought himself a double bass, found himself locked out of the studio, and to pass the time began experimenting with its sounds. The thematic material evolved, then presented itself as a duet, and he promptly recorded it. The drum and both basss parts are played by the composer.

Why Spend the Dark Night with You?: Another of Moondog's compositions in the form of a round. His intention is to leave the meaning of the lyrics to the listener; often, he finds, more is read into the words than he intended.

Theme and Variations: On a four-note theme Moondog here builds one of his most ambitious orchestrations, using more than twenty voices played by himself. An interesting note on the percussion techniques: while playing the drums, he wore gloves with the finger-tips pulled slightly out, giving the extra dimension to the tone.

Rim Shot: This is a study in 5/4 time, example of acceleration in music. The work is scored for percussion only.

Both Suite No. 1 and Suite No. 2 are written in the twelve-tone chromatic scale used by the Vienese masters, such as Beethoven and Brahms. The classic tonal structure is used to evolve a five part invertible counterpoint. The Suites are parallel compositions; No. 1 is written in a minor-major-minor sequence, and No. 2 in a major-minor-major sequence. Moreover, the times of the correspoding movements are the same in both suites. Each movement is in canon form, separate thematically from its companion movements.

Suite No. 1: The instrumentation here consists of dragon's teeth drums (with gloves), two violi three celli and a set of five temple blocks. Throughout the entrances of the strings is in this order: 'cello, viola', 'cello, viola' and finally 'cello'. The first movement is in 7/4 time, the second in 5/2 and the third, where the composer's wife may be heard on the Japanese drums, is in 7/8.

Suite No. 2: The first movement here reverts to the initial instrumentation of the first Suite, and to the 7/4 time. The second movement, adding the woodblocks, temple blocks and claves mounted on a frame, is in 5/2 time. The final movement, again in 7/8, presents another new and intriguing instrument, the tuji. This is a sort of board with dowels mounted in rows. The dowels are fingered swiftly by the player, producing an unusual percussive sound. 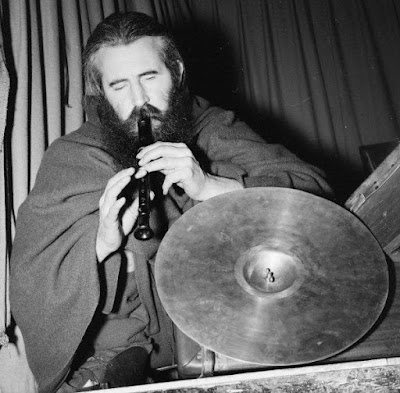 A mostly self-taught composer, Louis Hardin was born in Marysville, KS on May 26, 1916. The family eventually moved to Wyoming, where his father, who had been an Episcopalian minister, opened a trading post at Fort Bridger, and had two different ranches. Young Hardin went to school in a log cabin in Burnt Fork, WY, and fished, hunted, and trapped. Later, he rode a horse to school in Long Tree, a cattle community. He wrote that his first drum set " ...at the age of five, was a cardboard box". He also went with his father to an Arapho Sun Dance, where he sat on Chief Yellow Calf's lap and played the buffalo skin tom-tom. Later, in 1949, he played tom-tom and flute at a Sun Dance held by the Blackfoot in Idaho. The constant "tom-tom" beat became incorporated in many of his later pieces, such as the complex canon for marimbas "Wind River Powwow: Arapa-Host, Arapa-Home, Arapa-Hope." He played drums in Hurley High School in 1929, and he lost his sight in his early teens when a dynamite cap exploded. He studied music and finished high school at the Iowa School for the Blind, and in 1933, studied braille at the Missouri School for the Blind in St. Louis. "I write all my music in braille. When I write for orchestra, I do not write scores any more, but just write out parts, for the score is in my head and just writing out the parts cuts the time and cost in half ... anyhow, if my pieces were ever in demand, a score to each could be made from the parts. I call this process 'intracting', as opposed to the opposite, having a score and 'extracting' parts from it. From the braille I dictate every slur, tie, expression mark." It is then written in pencil by another person, read back and corrected, then inked in by another person - " .. double trouble". Hardin lived in Batesville, AR until 1942 when he got a scholarship to study in Memphis. However, he mostly taught himself ear training and other musical skills, and theory from books in braille. In the fall of 1943, he came to New York and met Artur Rodzinski, Leonard Bernstein, and then Toscanini. In a legendary story, Hardin made to kiss Toscanini's hand " ... whereupon he pulled it away, saying, 'I am not a beautiful woman'". Hardin began using the name Moondog as a pen name in 1947 in honor of a dog "who used to howl at the moon more than any dog I knew of." His music, constructed of direct musical gestures and built mostly from pure modal themes expanded by sophisticated contrapuntal techniques, would now receive the avant-garde label of "minimal" or pattern music, but this sound has characterized his music since the late '40s, and is thus a precursor of that postmodern compositional style. In New York, Moondog began to meet legendary jazz performer-composers, such as Charlie Parker and Benny Goodman, and to incorporate jazz inflections, as well as humorous philosophical couplets and environmental sounds into his recorded compositions -- the early recordings on the Prestige label in 1956 - 1957 contain brief pieces such as "Up Broadway/The impressions of Moondog as He Passes Birdland and the Palladium up the Great White Way ... (a) Broadway and 52nd St., the Jazz Corner of the World. A dog Trot in 1/4 Time ... (b) Broadway and 53rd St, the Afro-Cuban Corner of the World -- A Bumbo in 4/4 time ...," and a duet for the whistle of the ocean liner the Queen Elizabeth and a bamboo flute. Moondog also sold his printed music and records, and performed on the streets of Manhattan. His music truly expressed a universal vision with the best of American musical sensibilities. Moondog passed away on September 8, 1999 in Germany at the age of 83. 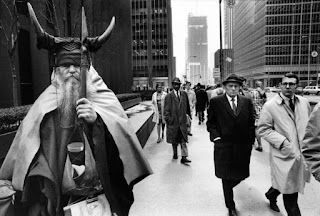 Imagine that when The Velvet Underground, Slint and Swans finally got discovered (I know it's hard to believe, but it did take some time for the world to catch up to them), they weren't remembered primarily for The Velvet Underground & Nico, Spiderland and Children of God, but rather for Loaded, Tweez and The Burning World. Hilarious, isn't it? Well, that's exactly what happened to Moondog.

It's very hard to find anyone who knows Moondog, but if you do they'll probably say they've only heard his 1969 self-titled LP. They'll tell you it's great, of course, because it would be bad taste to not appreciate the king of the outsiders, but the truth is, the 1969 LP is not that great. Proof? Vast majority of the people who've heard it never venture beyond it, apparently not too encouraged by its quality.

The moral of the story? When you finally feel like checking out this urban legend of a man, do yourself a favour and instead of listening to the proper but uninspiring, maybe even overblown and certainly overhyped classical music collection Moondog (from 1969), listen to this weird, whimsy, totally unprofessional but completely original avant-folk milestone instead.