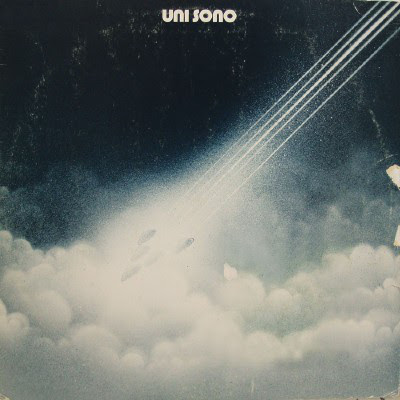 
Sort of a Finnish Fusion supergroup, set up in 1973 with Paroni Paakkunainen on sax/flute, Olli Ahvenlahti on synths/elctric piano, Reino Laine on drums, Mike Koskinen on trumpet, Piirpauke's Hasse Walli on guitar and Make Lievonen on bass.For unkown reasons though the line-up that made it to Uni Sono's sole self-titled album from 1975 was Paakkunainen, Ahvenlahti and Laine along with Pekka Pohjola on bass and Nono Soederberg on guitar.The album was released on the Hi-hat label.

''Uni sono'' is somewhat similar to pre-Bill Connors WEATHER REPORT lp's, smooth Jazz Fusion, which occasionally breaks into a minimalistic moods and ethereal soundscapes, due to the presence of Ahvenlahti there are maybe stronger bits of atmospheric synthesizers around.Regarding the veteran, experienced line-up, we should expect much more from such a formation, the combination of keyboards, sax soloing and funky lines on bass is not fully convincing and the album lacks certain levels of energy, ending up to be pretty monotonous and laid-back as a whole.Lots of electric piano, dreamy sax melodies and solos and sporadic guitar moves are contained in this one, but the atmosphere even tends towards Lounge Jazz at moments, making the album better as a background listening.Not very fond also of the individual and isolated instrumental noodling or the abstract improvisations.On the other hand, when the team decides to collaborate, the music becomes more cohesive, tight and interesting like in the opening ''Tvl'' or the second part of the 11-min. long ''Jedi and Rekku'' with the very good guitar solo of Soedberg and the pounding electric piano of Ahvenlahti.

The project came to an end the very same year, when Paakkunainen moved to USA to study in the Berklee School of Music.Pekka Pohjola of course continued his very interesting solo career and teamed up again with Olli Ahvenlahti in The Group.

Average Jazz Fusion, executed by an impressive line-up, but good moments are unfortunately few, as the team spent its time mostly in relaxed and non-risky ideas.Recommended to fans of early WEATHER REPORT.
Posted by Zen Archer at 5:19:00 AM