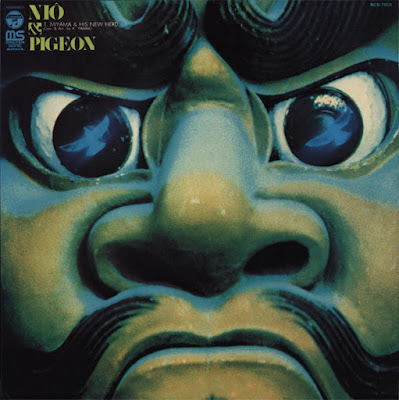 In 1921, one of Japanese Jazz Giants, Toshiyuki MIYAMA was born in Chiba-City, Japan. He joined the Japanese Naval Military Band in 1939 and played upon deck of many Japanese warships such as Hyuga, Yamashiro, Nagato, or Yamato ... this valuable experience could let him go up the stairway to the herald of Japanese Jazz scene. Soon after the World War, he showed his ability as an alt-saxophone player and formed a jazz band Jive Aces in 1950, which performed and were approved in US Camp etc.

In 1958 Jive Aces, with lots of musicians added, changed their band's name into NEW HERD (TOSHIYUKI MIYAMA & HIS NEW HERD). Although they were a back band on a dance floor in 1950s, NEW HERD established Japan Modern Jazz scene, much influenced by the members / 'bebop' arrangers Kozaburo YAMAKI or Hiroshi TAKAMI, in mid 1960s. Finally, 'Perspective' released in 1969, featuring Masahiko SATOH, could be much appreciated and they had reached the peak of their popularity in Japanese 'Big Band' Jazz world.

'Yamataifu' (1972) was released exactly in their most active period. This album should break the common sense of Japanese Jazz easily, in collaboration with Masahiko SATOH again, and won the Nippon Geijutsusai Yushu Prize, a very honourable one.

This HAS to be a soundtrack. Big band jazz, with some tracks dedicated to slower ballads and some dedicated to yer classic film "tension jazz". Some interesting writing. A few of the tracks make some unexpected ambient diversions.

Adult's Day is a ten minute track that sounds like a watered down outtake from In A Silent Way, which means it's pretty damn good, but the rest of the tracks are rather slow going.