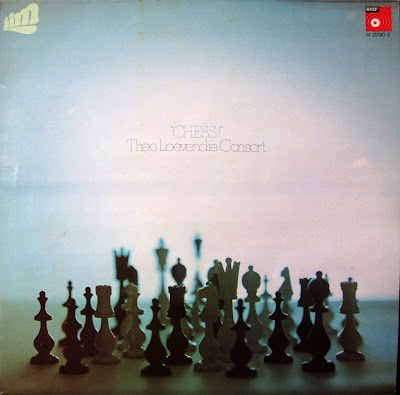 Theo Loevendie is a Dutch jazz clarinetist and composer and has been one of the key figures in Dutch jazz and improvisation since the sixties. In the early seventies Loevendie created two albums under the name Theo Loevendie Consort: Chess and Mandela (both have been reissued on a CD which is also out of print).

The Theo Loevendie Consort is basically a Dutch supergroup of jazz and impro musicians. The group consisted of trombonist Willem van Manen, icon of Dutch jazz: saxophonist Hans Dulfer, bass clarinet wizard Harry Sparnaay (to be found on this blog), pianist Leo Cuypers, bass player Arjen Gorter, saxophonist Leo van Oostrom and drummer Martin van Duynhoven (who was also in Group 1850, one of the best psychedelic Dutch bands from the sixties and seventies).

Chess! is an important album in the Dutch (free)jazz realm, but to my personal taste not the best effort you'd expect from a supergroup like this. I suppose it was hard for them to find the right balance between their melody foundations and free jazz outburst and the space everyone had within that division. But then again maybe that's exactly what they tried to do according to the liner notes, namely:  "Anthitheses, depicting a fight between worn-out traditions and the modern improvisation approach". For example the first piece chess is a nice combination of a simple happy melody and free jazz. The piece brasilia combines a Brazilian-like melody with chaotic saxophone bursts. All in all the whole is a cool example of Dutch free jazz and does grasp the groovy spirit of that particular time in Holland. Maybe it's just that one has too high expectations being confronted with a supergroup of this degree.
Posted by Zen Archer at 7:32:00 PM