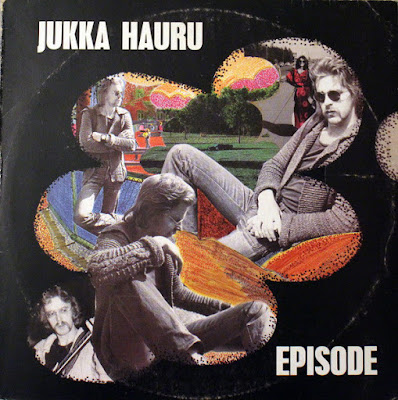 
Episode was a completely different beast. Eradicating any sense of the Hendrix inspired psychedelic nature of the first album, Hauru did what many early 70s artists did in the fusion era by slicking up his sound into a unit where complicated unison lines are practiced into sterility and virtuosity becomes prominent. Fortunately Hauru brought with him from Information his skill at balancing aggressive pieces with those more low key, although by now all focus is on fusion and jazz to the detriment of those zany, wild-flying pieces that made his debut such a joy. It's not to say the playing isn't any good, if anything it's certainly more mature, yet the restraint and lack of raw power takes the edge off in ways that adds to the loss of distinction. Information was a psych rock ensemble verging fusion, while Episode is after the arrival to the latter. There are still plenty of solo moments from guitar, sax and even an increase in the synthesizer/keyboard prominence, but the atmosphere here seems subdued. I suppose I'd have been more impressed had I heard this album first; it even has a smaller song line up. But overall, it's difficult to see this as anything but "yet another fusion album," particularly disappointing after such an amazing debut.
Undoubtedly Hauru went onto other things, but left no other solo albums under his name after these two. Certainly Information is highly recommended and fans of fusion should probably check out Episode as well. Hauru was truly one of the better unknown guitar players from Europe.