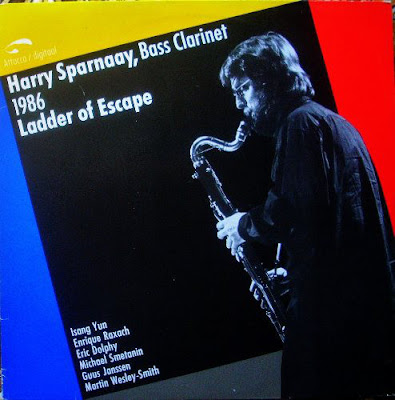 Next stop is another modern composed record by Dutch bass clarinetist Harry Sparnaay. Ladder of Escape consists of six compositions for bass clarinet by composers from all over the world. There is a Korean, Dutch, two Australian, American and a Spanish composer present on this record. An earlier Sparnaay album on this blog can be found here.

Ladder of Escape is a kind of metaphor for the way in which Sparnaay helped to promote and free the bass clarinet of its conservative and dull image. Ladder of Escape is also a piece on here dedicated to the memory of Spanish Catalan painter and artist Joan Miró. Most of the compositions are solo pieces on the bass clarinet. The composition I uploaded below is a long piece called For Bass Clarinet and Tape composed by Australian composer Martin Wesley-Smith. It has a hectic almost RIO or Zappa-esque touch to it and merges the bass clarinet with electronics.Very nice.

Though perhaps a curiosity of the past, the bass clarinet has now thrown off its chains. Through its limitations it has fought its way to freedom. Indeed, if the bass clarinet was formerly regarded as a chained instrument, it needed a Houdini like Harry Sparnaay to free this "low-keyed lady" under the instruments from her isolation.