Ross
1974
The Pit And The Pendelum 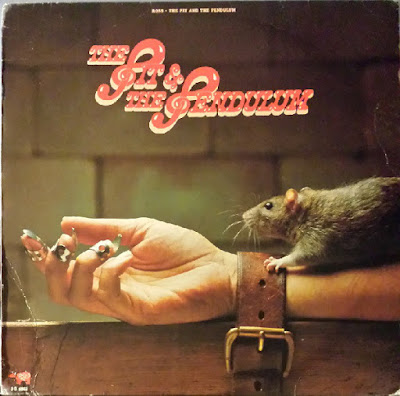 
Concept albums are virtually non-existent in today’s music scene, but they were quite popular throughout the 1970s. Basically, a concept album revolves around a central theme and all songs relate to telling a story or expanding on the idea contained in the theme. One that may be most familiar to music lovers is 2112 by Rush. The whole first side follows the adventures of a rock and roll kid rebelling against a dictatorial government. The Who (Tommy), Pink Floyd (The Wall), and Genesis (The Lamb Lies Down on Broadway) are all examples of concept albums.

In the case of Ross, a mid-70s band that only released two albums before splitting, they used Edgar Allan Poe’s short story for inspiration. Published in 1842, The Pit and the Pendulum tells the story of an unidentified man that becomes prisoner of the Spanish Inquisition. He is strapped to a table and left to die via a large swinging pendulum, which has a rather nasty razor at the end, the intention being to swing until it reaches the man and divides him in half.

Sounds like a cool idea for a heavy metal album, which I thought it was when I bought it in 1974. Alas, it was but a dream within a dream. The album does have its rocking moments, but is tamer than I had hoped. It reminds me more of a band like Styx rather than the doom & gloom hard rock expected from using the dark writings of an alcoholic and drug addict.

Alan Ross was a guitarist with John Entwistle’s (The Who’s original bassist) short-lived side project Rigor Mortis. Ross left to form his own band and released his self-titled debut in 1973, then The Pit and the Pendulum in 1974. The material ranges from the quieter pieces like Swallow Your Dreams and I’ve Been Waiting to the harder riffage in Gotta Get It Right Back and So Slow. Touches of keyboards from his Rigor Mortis bandmate Bob Jackson help to color the tunes and trade off electric piano solos with Ross’ guitar licks.

Lyrically, the songs don’t help to tell the story. All you would get from the twelve songs is that someone is scared, someone doesn’t know where they are, and someone doesn’t know why they are about to die. This also raises a complaint that I level at many guitar players. Get yourself a lead singer because you can’t sing. Ross has a weak voice to begin with, and struggles to hit any higher notes outside of his three-note range. A talented singer could have taken advantage of the many melodies found here.

The album ends with an except from an unrelated Poe poem that has no use other than for the prisoner, who has escaped the pendulum, to say, “I’m happy now.” Considering the many fine poems that Poe wrote in his brief 40 years of life in this astral plane, it’s easy to see his material adapted to a concept album. Ross might have been better advised to set music to Poe’s own verses instead of trying to interpret one story in his own words.

Finally, I have to address something I found as I did research on the band. Fans of the album have posted positive reviews, which is all good because I like it as well, but we need to get our rock genre definitions straight. I have seen this album described as both “funk rock” and “progressive rock.” It sure as heck ain’t funk rock, as my idea of funk rock would be along the lines of Trapeze or the Red Hot Chili Peppers.

As far as progressive, there are three bands that define that genre: Yes, Genesis, and Emerson, Lake and Palmer. The arrangements on The Pit and the Pendulum do not approach that style. No long, complex instrumentals with odd time signatures, and no weird song titles like The Temple of Scrotum Parts I-IV. This is closer to AOR than what you’d find strung out over three discs. If you are a hard core E.A. Poe lover and also dig Styx and The Grand Illusion, this might be worth checking out.
Posted by Zen Archer at 1:44:00 AM