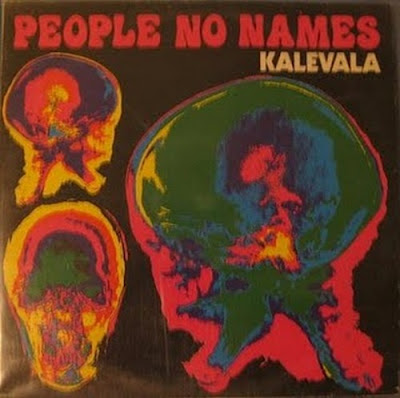 Not to be confused with the more modern Russian folk-metal band, this KALEVALA is from Finland and was formerly named Vietnam before changing their name to the 19th century epic compilation of poetry by Elias Lönnrot which is regarded as some of the most significant literary works in all of Finnish national identity. Well, if you're calling yourself the musical Finnish equivalent of Shakespeare then you should expect some pretty epic music delivered, don't ya think?
KALEVALA was formed in 1969 by bassist Juha "Lido" Salonen and the name actually came about by accident. When touring under the name Vietnam, one of the concert organizers objected to the name and forced them to change it. The band went through many line-up changes but it was the guitarist Matti Kurkinen who would steer the band into the progressive arenas of rock and wrote all of the tracks on PEOPLE NO NAMES, their debut album all by his lonesome. The original release was put out by Finnlevy Records but has since been remastered and is available on the Svart label.

The album was released in 1972 and many of the progressive rock influences of the day can be heard starting with the 9 minute title track which begins with a nice acoustic intro and turns into a nice hard bluesy rocker that has a Jethro Tull kind of riff with some of the frenetic energetic parts sounding like the intro to "Heart Of The Sunrise" from Yes' "Fragile" album. The highly energetic rockin' parts are pretty heavy for 1972, so this rightfully can be placed in the proto-metal camp as well alongside UFO, Uriah Heep, T2 and Led Zeppelin. On the prog side the compositions are much more varied and sophisticated than any contemporary hard rock bands of the day that still utilized blues scales as the basis for song structure. Harri Saksala does bring a deeper voiced Ian Anderson to mind in his vocal delivery at times but his styles vary as much as the tracks themselves.

After the frenetic title track, the second track "Where I'm From" is a light airy and breezy piano and acoustic guitar number with emphasis on a strong melodic development before bursting in a very Tullish sound complete with flute. The track despite the strong Tull influence manages to keep a couple steps away from diving too far in that direction especially as the piano part alternates to keep the piece unique. The third track "Waves" reminds more of Can rhythmically but with a nice symphonic keyboard embellishments and a beautiful guitar solo gives it the right amount of oomph. "In The Net" is probably one of the weaker tracks. Reminds a bit of Deep Purple. Maybe "Highway Star" type riffing. Vocals kind of weak but overall saved by an unexpected harmonica solo. "My Friend" is a short little piano ballad that is probably the least impressive track on the album. "Lady With The Veil" is a nice number that begins as a ballad but kicks into progressive heavy rock with excellent super fast drumming from Markku Luukkanen and excellent guitar work. One of my favorite tracks. "Escape From The Storm" is one of the most psychedelic tracks which incorporates acoustic and electric guitar codependencies and wah-wah splendor. Another excellent track. "Tamed Indians" is a strange little folky closer that sounds like a Finnish traditional complete with accordion and foot stompin' delight :)

This is a fairly obscure album even though it has been re-released and although it has been touted as a long lost masterpiece, i don't feel it quite reaches those lofty heights although i do find this to be a very welcome obscurity into my collection. The variation and Kurkinen's excellent guitar playing keep this album from ever drifting into mediocrity and although the band are master's of the cut, copy and paste approach to create a nice mix of ideas, they clearly hadn't quite sewn all the influences together to create a unique and totally original sound. Still an impressive early collection of heavy rockers mixed with nice mellower tracks. This album is available on CD despite there being no info that it exists (i found one by chance) but it is probably easiest to obtain as a two-fer-one with the second album "Boogie Jungle."
Posted by Zen Archer at 8:12:00 PM