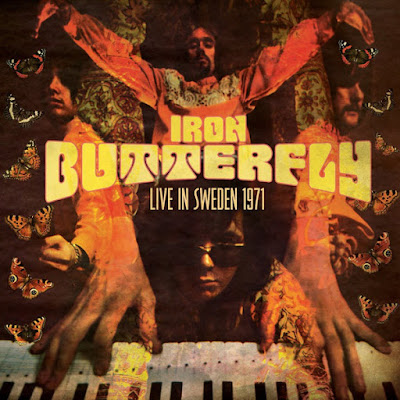 
After the recording of Heavy, the band fractured when three members left, leaving only Ingle and Bushy holding the bag. When informed by Atlantic Records that their debut album wouldn’t be released if there was no band to tour behind it, the pair recruited bassist Lee Dorman and guitarist Eric Brann, a 17-year-old musical prodigy. It was this line-up that recorded the In-A-Gadda-Da-Vida and Ball albums, representing the band’s commercial apex, the former LP selling millions of copies, the later certified Gold™ for a half-million in sales. When Brann left the band in 1969, he was replaced by a pair of talented guitarists – Larry “Rhino” Reinhardt and Mike Pinera, previously of one-hit-wonders Blues Image (“Ride Captain Ride”); this is the line-up that would record the band’s 1970 album Metamorphosis.

Live In Sweden 1971 offers better sound quality than Live At The Galaxy 1967, not only because of the passage of four years and improved sound technology, but also because it was taped for a live radio broadcast rather than from the middle of the audience. The album consists, primarily, of two lengthy live tracks – the first, “Butterfly Bleu,” was drawn from Metamorphosis. While the song clocks in at slightly more than fourteen minutes on vinyl, on stage the band would extend that running time considerably with acid-drenched instrumentation; here on Live In Sweden 1971, the song runs better than twenty-three minutes. It’s everything you might expect from a psychedelic-rock band at the dawn of the 1970s – lengthy passages of squalid sound, raging guitars, steady drumbeats, and Ingle’s trademark keyboards buried in the mix. Although it’s an exhilarating ride the first time you take it, two or three listens later it just becomes tedious.

Which leaves us with “In-A-Gadda-Da-Vida.” The song was a consistent crowd-pleaser among stoned audiences worldwide; it’s performed here at half-again its original studio running time, beginning with Ingle’s throaty vocals and sepulchre organ riffs before dancing into a free-form jam. The addition of guitarists Pinera and Reinhardt, neither of whom played on the original studio recording, brings a new texture and sound to the song that had been missing before. Although Lee Dorman’s familiar and notorious walking bass line still holds down the bottom end, the two guitarists weave various interesting patterns throughout the song. Their skills add a dimension previously lacking to the song, one that holds up better after a few listens than does “Butterfly Bleu.”

This disc was taken from the last tour of Europe that Iron Butterfly did before Band Leader Doug Ingle decided to quit.Butterfly Blu and In-A-Gadda-Da-Vida are the only tracks that are live.The rest are what I think are early acetates that were handed to Record Companies before a band would be signed.The three demos turned up when the Janus,Italian record label sold them to the public,in the form of 45rpm singles.A few have surfaced in record shops from time to time.Pocession,Evil Temptation and Don,t Look Down On Me are the pre-Heavy group recordings.The last three songs were released in the early 1970,s in vinyl 45 rpm form.Don,t Look Down On Me is the only track that was not written by the members of Iron Butterfly.The recordings are for the diehard fan who wants everything Iron Butterfly,the demos are interesting to hear the band in it,s very raw form.
Posted by Zen Archer at 9:24:00 PM