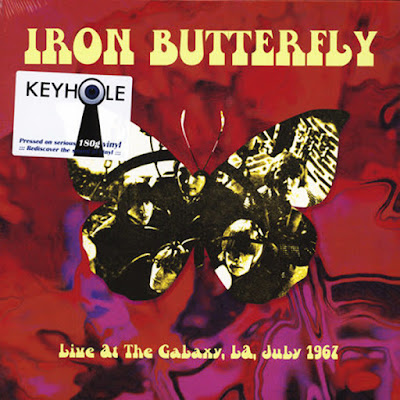 The amazing things are that Danny Weis wasa decent guitarist and some of these songs actually appeared on their third sudio album "Ball" Some ssongs are a bit different, the lyrics are (in places) different and Eric Brann lifted a few licks from Danny Weis (but he was a good guitarist in his own right). I'm not sure exactly why Danny and Jerry Penrod left the band (but they ended up in Rhinoceros, their first album was also excellent but they were great in that first album!), but Darryl DeLoach had a minimal (thankfully) part to be sure. I mean a fifth member for a little tambourine and background vocals, and not very good ones at that.

"Heavy" was done by this line-up before Weis, Penrod and DeLoach left and Erik Brann (a teenager) kept them on track for a while on In-A-Gadda Da Vida" forward. Lee Dorman was always a great bassist and showed all his stuff in "Captain Beyond" I like all of thid band's releases except "Live" , but this purchase was a surprisingly good one. (One star off for sound quality, but it's not bad considering.)

The band had a revolving door of members I was totally unaware of. I knew it wasn't the real Iron Butterfly I knew on the commercially released "Live", but holy cow. Just check it out @ [...] to be amazed. This isn't even the true "original line-up" !By the end, Erik Brann in his 2 albums of incarnation of Iron Butterly was the only member I knew and he was not in the original lineup. Ron Bushy evidently has use of the group's name now. RIP Eric and Lee.

Iron Butterfly’s Live At The Galaxy 1967 is a curious memento of the short-lived line-up that recorded the band’s debut album. Capturing a July 4th, 1967 performance at the notorious L.A. club, the track list features half-a-dozen songs that would be recorded later for Heavy, three that wouldn’t be waxed until two years later for their 1969 album Ball, and a handful that would never be heard from again. The sound quality of Live At The Galaxy 1967 is par for an audience bootleg; befitting the (relatively) primitive recording gear at the time, the performances are hollow and cavernous, rife with distortion, and often seemingly out of sync. Still, for this rare a performance, it’s tolerable overall, and even with the sonic drawbacks, what is striking is how “heavy” the songs actually are.

After roaring through the strident, instrumentally-busy “Real Fright,” which would re-surface on Ball, “Possession” is the first of the Heavy tracks. Opening with Ingle’s chiming organ and Bushy’s martial rhythms, Weiss embroiders his guitar on top of the almost-chanted vocal harmonies. It’s a gothic-sounding performance, with plenty of hallucinogenic overtones, dense and yet you can still pick out and admire the individual instrumental contributions amidst the swirls of sound. Of the other Heavy tracks, only “Iron Butterfly Theme” and “You Can’t Win” stand out; the former is a cacophonic instrumental that was definitely acid-inspired and noisy, pre-dating a similar chaotic art-rock trend by a decade. The latter is a riff-heavy rocker with some nice guitar playing and Ingle’s ever-present keyboards.

Some of the other tracks on Live At The Galaxy 1967 are much more interesting. “Lonely Boy,” which would be recorded later on Ball, suffers from probably the worse sound on the album, but it’s an affecting ballad with the slightest of melodies, featuring instrumentation that is more subtle than anything else on the album. Another Ball track, “Filled With Fear,” offers appropriately muted vocals, squawks of terrifying sound, scraps of wiry guitar, and Bushy’s deliberate, marching drumbeats. Of the “lost” tracks, “Evil Temptation” shows the most life, with livewire guitar licks that sound like broken shards of glass, up-tempo organ riffs, bombshell percussion, and an overall punkish intensity that rivals the Stooges.
Posted by Zen Archer at 9:06:00 PM